Where do you go for fresh ideas? 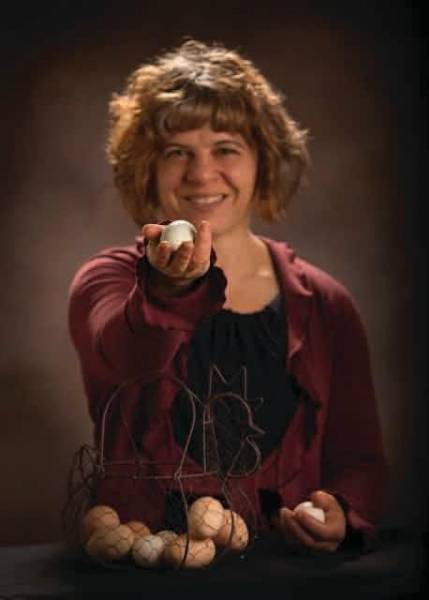 Bonnie Simon is an intrepid urban homesteader, teaches food preservation classes, promotes local businesses on her Hungry Chicken Homestead blog, and served as marketing manager for the Colorado Farm and Art Market. She is famously enamored of her backyard chickens, which give her endless amusing anecdotes to write about on her blog. Here, she reveals how a life-long love of vegetables eventually inspired her to ditch the corporate world in favor of promoting local food and agri-tourism businesses. Read her articles on-line at HungryChickenHomestead.com

Q. What are some of the earliest and best food memories from your childhood?

Peas! My favorite food memory from childhood is peas. Frozen green peas right out of the bag. My mother tells a story about when I was three years old and she told me I could have anything I wanted to eat for my birthday and I said I wanted a bowl of green peas. And that’s what I got. To this day, on a hot day, I will eat peas right out of the bag.

Q. Do you have other early impressions of special regional or cultural foods?

For me it’s Jewish foods. I remember potato pancakes on Hanukkah, which I still make. My mother and I have a debate about this: she likes them all blended up with no chunks of potato in it. I like them shredded and very potato-y.

Actually there are lots of Jewish holidays, and there’s always some special food to go along with them: homemade donuts, potato pancakes or challah, always something.

Q. What drew you to urban homesteading and food preservation? Do you have farming or gardening in your background?

I grew up in the suburbs. But there’s something about the chickens and knowing how to do things for myself that somehow makes me feel more grounded. I feel more comfortable knowing how to produce my own food. There was a thing in the paper one time: could you survive in your house for three days if the grocery stores were all closed? I could survive for three days in my garage if I got locked in there, because there’s enough food to eat and there’s water (for the chickens) too.

I’ve always felt this way. I just never had the chance to act on it until recently. I always did crafty things, but never had a chance to raise food before.

I got my chickens in 2010. I got four chickens and I have never paid for another chicken since then because everybody just gives me chickens now.

Q. Imagine you can have your choice of any gift or special dinner for Valentine’s Day, what would it be?

A half a beef and another freezer! What else could anybody want? (CLICK HERE to learn about how you can team up and buy part of a cow or pig using the cow-pool or pig-pool option.)

Q. What would you most like to see come out of the new downtown Public Market project?

I’m not sure what the plans are, but if I were making a market, my goal would be to bring a lot of awareness about how much local food we have here in Colorado Springs, which people don’t necessarily know. Colorado has a lot of farms. There’s a lot of food available – seasonally, of course. A lot of times people want to do the right thing, they want to buy local food, but they don’t want to do a lot of research to find out where it is. I would love to see the public market become the place that people go to when they want to buy local food. That would be fantastic.

“There are so many interesting foods. There are like 18,000 vegetables and we eat only a small fraction of them.” – Bonnie Simon of Hungry Chicken Homestead

Q. Where do you go to find new recipes (chefs, cookbooks, blogs, etc.)?

The sites I like are Epicurus.com and Food.com, the ones that are run by chefs, because the recipes work. My absolute favorite is Cook’s Country. It’s a magazine. What they do is they say, “we ate a wonderful hamburger with an avocado at so-and-such-a-place and we wanted to recreate the recipe,” so over and over they make the recipe until they get it right. You get food science explanations and you can see how they treat the ingredients to make it turn out differently. I’ve learned a lot from that magazine. That’s how I learned to cook meat, and how to cook fish in banana leaves, and how to make a pie crust by putting vodka in it. The vodka evaporates; you basically get the same crust but you don’t have to stir it so much so it doesn’t get tough.

In the winter, we like to turn on the oven at my house but something like baked potatoes take a long time to get done. So I had six baked potatoes in my refrigerator that were kind of shriveled up; they were still fine, but just didn’t look very appetizing. So I used them to make the crust for a shepherd’s pie.

I happened to be on the King Arthur Flour website recently and I saw a recipe for chocolate cake. It was a vegan recipe from World War II. No eggs, no dairy, because those things were rationed at the time. They had another section on the site about how to adjust for high altitudes: chocolate cakes are hard to make at this altitude because the air pressure’s so low that they over-rise and then they collapse. I modified the recipe, using coconut oil instead of vegetable oil, and then used less sugar so it’s less sweet and more chocolate-y. Apparently, if you reduce the sugar in a high altitude recipe, that step improves the texture. So I just reduced it more than I needed to. And it has espresso powder in it, which also makes it much chocolatier. It came out perfect! You can also add a frosting made from chocolate chips and coffee. It’s not for kids; it’s a grown-up dessert. (CLICK HERE for Bonnie’s WWII Era Chocolate Cake recipe at the Hungry Chicken Homestead blog.)