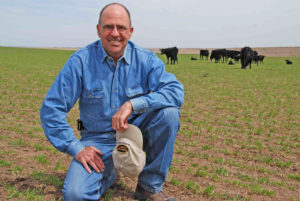 Our Story
Mike Callicrate, the founder of Ranch Foods Direct, is a rancher, business entrepreneur and family farm advocate. Considered the “go-to expert” on the negative consequences of industrial meat production, he served as an advisor for the films Food Inc. and FRESH and for several best-selling books including Fast Food Nation and The Omnivore’s Dilemma.

A native of Evergreen, Colorado, he earned a bachelor’s degree in animal science from Colorado State University in 1975 and then moved to St. Francis, Kansas, where he began his career in farming and ranching.

In 2000, he formed Ranch Foods Direct to sell high quality naturally raised beef directly to customers. Since then, it has grown into a prominent, well-respected marketing outlet in the community for small farmers and artisanal food producers from throughout the region. Today Mike’s farm follows a multi-species regenerative agricultural model, using the natural synergies between cattle, hogs and chickens to optimize the health of the livestock and the land.