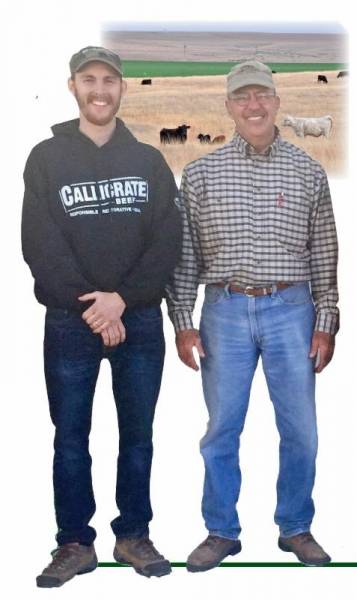 Chef Trent Johnson (shown at left visiting the ranch with owner Mike Callicrate ) grew up in a small Florida beach town, but ended up following his passion for food and cooking to Denver, where he attended Johnson & Wales University. This fall he joined Ranch Foods Direct as retail store manager, with plans to eventually oversee the full-service in-store deli. He’s counting the days until it opens: “I’m lost when I’m not cooking everyday,” he says. Following, more about Trent:

Q. HOW WOULD YOU DESCRIBE YOUR COOKING STYLE? I’m very influenced by the purity of the process and the tradition of how the food was grown, raised or produced. It’s very important to me what’s happening behind the beef I’ll be cooking and why the cattle are raised the way they are. That affects my decisions all the way down to what I choose to put on the menu that day.

Q. FAVORITE FOOD MEMORIES FROM YOUR CHILDHOOD? It’s not like I had a culturally diverse or particularly well-balanced diet as a child, but I do have some fond food memories. For example, buying boiled peanuts at the flea market. And my father used to make chicken and rice. It was very bland and boring, but that’s how I fell in love with black pepper. I always wanted more flavor out of it, so I would dump pepper on it, and now I love black pepper.

Q. WHEN AND WHY DID YOU DECIDE TO BECOME A CHEF? When I was 14, I had been mowing lawns for four years already and saving money, but I needed a real job. One day I walked into this little diner in my hometown and saw a “now hiring” sign. They needed a dishwasher. I started then and there, and eventually I was taking orders and waiting on people. One day the cook didn’t show, and I filled in. That’s how it started.

Q. NAME SOME PEOPLE IN THE FOOD WORLD WHO HAVE MENTORED YOU OR PROVIDED INSPIRATION. When I was 2 or 3 months into culinary school, I was very discouraged, thinking maybe it wasn’t the right fit for me, and I was also feeling a huge burden to succeed. Then I read a book, Life on the Line, by Grant Achatz, who owns one of the best restaurants in the world, Alinea, in Chicago. He had a similar background to my own. He ended up getting cancer on his tongue and lost all of his taste buds, literally, just as he was opening his very first restaurant. I thought, if this guy can go through something like that, my trials and tribulations are a blip on the radar. One of my early jobs was at TAG restaurant on Larimer Square in Denver. I was exposed to the nuances of fine dining in a fast-paced city, but it was also the first time I was really trained and mentored. Working there was probably the most influential 3-month period of my career.

FAVORITE RFD PRODUCTS? The number one most impressive product here is definitely our bone broth. Also, the selection of offal and utilization cuts, like hanger steak and Teres major; there’s such an array of ingredients I’d never worked with before. I’m a big fan of all of the small producers we carry too.

FAVORITE HOLIDAY MEAT AND SIDE DISH? I was always a ham guy, and I love my mom’s green bean casserole.

WHAT DO YOU CRAVE MORE, SWEET OR SAVORY? I have a sweet tooth! I drink rum; I could live on cookies. One thing I really enjoy making is Peach Melba. There are a vast variety of ways you can make it; it’s open to interpretation. Not having a box to work in makes it attractive to me.

WHY RFD? I wanted to work with the best! I didn’t believe anybody else out there really stood behind what they were saying. I’ve had to deal with a lot of false advertising (around food.) That’s not something I was willing to settle for.

Preheat oven to 350 degrees. Butter (or spray) 8-by-8-inch baking dish. In a medium bowl, whisk together the eggs, milk, sugar and spices. Add the bread cubes with half of the cubed peaches and stir well. Let the bread soak for about 5 minutes then pour the entire mixture in.
Bake the pudding for about 1 hour. Test by inserting a sharp knife in the center, make sure it comes out clean. If not, continue to bake until set.
While the pudding is baking, prepare the raspberries by adding 1-2 tablespoons of sugar and, if using, the sweet wine or rum to the raspberries and let macerate for 20 minutes. Add the remaining peaches and stir well to combine.
To serve, scoop the bread pudding into individual dishes and top with the raspberry and peach mixture. Add a scoop of vanilla ice cream for the total Peach Melba experience.