In August, an introduction to pickling, colorful food preservation method 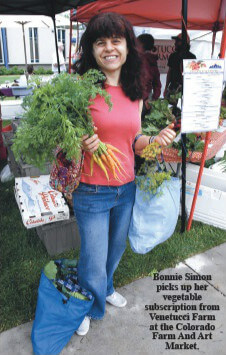 Bonnie initially planned to be a schoolteacher but she ultimately decided against that career, instead earning a graduate degree in computer science and working for a large insurance company. Seeking more rewarding work, last year she bought a house in a 1950s-era Colorado Springs neighborhood just so she could start a new business growing and making things. She calls it Chickens in the Kitchen. Her business motto is “safe, simple food in a busy complicated world.”

Meanwhile, she’s learning as she goes. “I’m calling it my homemade MBA,” she says. “It’s interesting to be in the city and have a semi-agrarian lifestyle. People don’t know how to do this stuff anymore.”

Simon grows her own food, volunteers at Venetucci Farm, teaches cooking classes and is in the process of developing a personal chef service based on local, seasonal foods. She also rents a booth at the Wednesday Colorado Farm and Art Market selling items she makes at the Gotta Love It Kitchen in Old Colorado City.

“I’m experimenting with about 15 basic recipes,” she says. “I want to stick with the seasonal aspect of it, so the apricot muffins I sell in the middle of summer may turn into a pumpkin version in the fall.”

A big joy in her new life is her four chickens, which yield a dozen eggs every four days or so.

“People are really interested in the chickens,” she says. “I always get lots of questions about them.” The questions tend to run to the technical, but one thing people often miss is just how much character they have.

“They have interesting personalities; they are so entertaining,” she says.

You can read about her life as an urban homesteader at www. HungryChickenHomestead.com.

Celebrate Local Foods Week!
Bonnie will return in September to teach a canning class, one of several special activities being planned in conjunction with Colorado Springs Local Food Week, Sept. 18-24. Ranch Foods Direct is also looking forward to offering the store’s first-ever cheese making class! Get ready to celebrate the height of the season for local produce from area farms with concerts, contests, movie night, and more. Additional details will be published in our September newsletter.