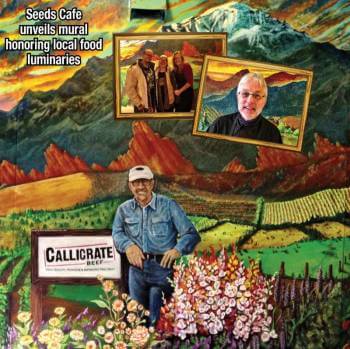 THE SCOOP:
Mike Callicrate, owner and founder of Ranch Foods Direct, was honored as the first “local food luminary” depicted on a striking new mural inside the courtyard dining space occupied by Seeds Community Cafe (shown above). Other local food heroes will be added throughout the year and unveiled during a series of special celebratory dinners to be held monthly. “We want this to culminate in a big bash during Local Food Week in September,” says Beth Alexander, the cafe’s events and catering manager. Mike’s portrait was kept hush-hush and then revealed during a special kick-off event, held January 29 and attended by many of his close friends. An elaborate pop-up dinner, prepared by Full Circle Cuisine Chef Kevin Campbell, showcased lesser known cuts of Callicrate Beef in the nose-to-tail style trendified by London’s Fergus Henderson.

THE BACKSTORY:
Chef Lyn Harwell, shown in inset above, brought the concept of a pay-as-you-can nonprofit cafe to Colorado Springs with the opening of Seeds last September and vowed to source everything possible from local growers and businesses. Though the concept was new to the Springs at the time, Beth says the response of the community has been nothing short of “phenomenal.” To celebrate – while also raising additional funds – the cafe wanted to create a joint tribute to local food, art and music, and arrived at the idea of showcasing a beautiful wall painting inside the cafe’s unique inner courtyard. In the second inset, above left, is the mother-son artist team, Raven Wolf and Re Morningstar, who brought the iconic Colorado Springs landscape to life. Beth, shown at right in the same photo, adds, “From the start, we’ve been filling this cafe with local art.”

WHAT’S NEXT:
Daily lunches at the cafe have gone over big, but Beth reminds everyone that catering and takeout options are also available. Since the cafe is a 501c3 nonprofit, your purchase is considered a tax deductible donation. “There aren’t any other caterers in town who can say that,” Beth points out. “It’s a win-win: it’s a donation to a good cause, and Lyn gets a chance to show off his amazing cooking skills.” No-one is ever turned away for lack of funds, and the operation emphasizes community-building by engaging lots of volunteers. For more on this visionary business model, sprouting in multiple cities worldwide, go to OneWorldEverybodyEats.org.