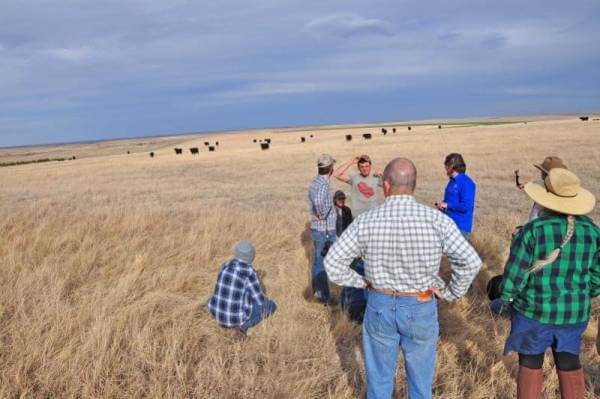 An apple orchard, more cover cropping and some new enhancements to the mobile chicken trailers are some of the new developments likely to result from the intensive design course led by Australian Darren Doherty in late March.

“We discovered we have a hard pan in some of our fields, caused by years of tillage,” says Callicrate Cattle Company owner Mike Callicrate. “We need to break that up with a yeoman plow and once we’ve done that we can start to do more cover cropping to put organic matter back in our soil.
“The other thing we learned about the cover crops is that you have to leave a lot of residue on the surface, or otherwise the land gets bare and you have problems with weeds. You can graze it, but you have to be careful not to overgraze it. The standard rule of thumb is to let the cattle eat a third of the grass and leave two-thirds. The vegetative cover is like having armor on the land.”

Mike says he also has some new strategies for catching water on the property. And he’s hatching plans for some additional improvements to the chicken trailers while continuing to rotate the cows through adjoining pastures. In addition, he envisions reforesting the landscape with fruit and nut trees.