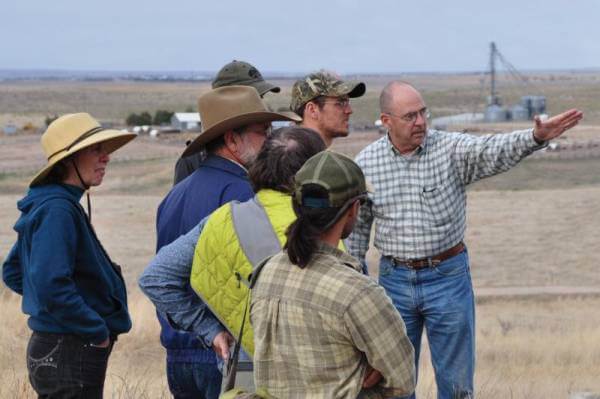 For ten transformative days, inquisitive minds roamed the range alongside the livestock at Callicrate Cattle Company, learning to intuit the land

In late March, a fascinating group of forward-thinkers, innovators and change-makers converged at Callicrate Cattle Company for a ten-day intensive regenerative farm planning and design workshop led by Darren Doherty, a world recognized consultant and facilitator.

Owner Mike Callicrate met Doherty a few years ago on a business trip to Australia and immediately began a long-term collaboration with the native Australian, who is considered a leader worldwide at shifting farms and ranches from the current “extractive industrial model of production” to sounder approaches based on regenerating and rebuilding soils, landscapes, ecosystems and rural communities.

“I wanted to put together a systematic plan going forward that accomplishes our goals rather than just talking about it and never doing it,” Mike explained. “It’s a complex undertaking. It’s hard rebuilding a broken food system. It’s hard for a ranch even to stay in business without fair markets or a democratic food infrastructure that serves everyone equally.”

In the final analysis, he considered it as important to avoid missteps as to brainstorm the full range of possibilities suited to the short-grass prairie environment, which is particularly fragile because it overlies the rapidly depleting Ogallala Aquifer. (He discusses his concerns about the dwindling water supply HERE as part of an HBO special investigation.)

Mike’s northwest Kansas ranch was the second stop on Doherty’s 2016 Regrarians 10 tour (aka REX), which began in California and has additional workshops scheduled in Tennessee, Texas, Oregon and upstate New York, as well as Chile, Mexico, France and Morocco.

Comprised of 1,200 acres of contiguous semi-arid plains, Callicrate Cattle Co. is on the large end of the spectrum of farm sites Doherty plans to visit this year. He was enthusiastic about the venue and its unique challenges.

“I like to work with host farms that are representative of their region, since my emphasis is on working agricultural landscapes,” Doherty explained.

At the outset of the planning process, Mike (shown above right) expressed several long-term goals for the property, including optimizing the production of multi-species livestock and developing a soil-building operation that would create additional revenue while benefiting neighboring farms. His son Teegan, a gifted metalworker and construction manager, also shared several big-picture priorities, such as growing healthy food, passing on a healthy environment to his infant son and retaining or attracting more young people to the local community.

Several attendees came from Colorado Springs and Denver but others traveled from as far as Eastern Canada to attend the mix of classroom-style strategy sessions and on-farm evaluation and planning exercises.

Doherty has presented more than 200 landscape design workshops in all kinds of geographies and climates around the world. His format is a comprehensive review of every feature of a farm, including placement of water sources, roads, buildings and future tree plantings; livestock rotation and foraging patterns; soil types; and more. The process builds on an inter-related series of questions. How can water runoff be captured and stored for future use? How can fences, roads, trees and buildings be configured to best enhance the farm’s workflow? How can various revenue streams be integrated so they support and enhance the farm’s overall economy?

Each day entailed a combination of reading and plotting new configurations on maps, interspersed with studying, measuring and intuiting the land, water, wind and vegetation.

“We put a bit down on paper and then we go out and look at it, and then we come back in and add some more scribbles,” Doherty explained.

He established a participatory, peer-based learning environment by dividing participants into small groups each charged with developing their own plans, making presentations and asking questions at the same time as he was conducting his own assessment and design.

Not surprisingly, the roughly two-dozen who participated in all or part of the course were interested in food production, landscape management or both. More intriguing was that everyone brought a broader social mission to their ambitions as well.

That common thread made perfect sense to Doherty.

“Agriculture is a social act, because it feeds the world,” he said. “In some ways it’s the ultimate social activity. It’s the foundation of civilization as we know it.”

Those attending from the surrounding region included Brian Lassek, of Black Forest, who is involved with Fox Hole Homes, a New Mexico nonprofit that seeks to create sustainable off-the-grid housing communities for homeless veterans. “For me, all of this stuff is about freedom,” he said, emphasizing the importance of psychological freedom and freedom from addiction. He wants to redesign communities in ways that enhance the health, well being and social support of residents.

“I understand that homelessness is not just about financial or social issues. You can’t solve it by throwing money at it,” he said.

“I’ve been doing permaculture on a small scale since 2002, but it’s so interesting to look at this from the standpoint of a large expansive farm and the acres beyond it,” she said. “I’ve wanted to do something like this for a long time. Converting 500-square-foot yards is great, but it doesn’t have the same effect. It isn’t the solution. I just think seeing this process done on a broad scale is really powerful.”

“Water has many more roles in the function and management of a property than I previously imagined,” he said. “I’m finding things here that might apply to my future endeavors and also learning about what the most passionate permaculture practitioners are doing around the world today.”

Also hailing from southern Colorado was Ryan Sanders, who owns 6 ½ acres near Beulah at the headwaters of the Arkansas River. As he develops the property, he hopes to create a sustainable management model for grazing lands that can be adopted by neighboring ranchers.

One last-minute guest to the party was Christopher Gish, who works in food service at Linger Restaurant in Denver. Doherty and his family had dinner there with Mike Callicrate the night before the course began and offered Gish, who ended up waiting on them, a scholarship to attend. Gish was blown away by the invitation, in no small part because it gave him a chance to become intimately familiar with the ranch that provides the beef featured in several popular dishes at the restaurant, including the sliders, barbecue tacos, Cubano sandwiches and something called “hangover ramen.”

“I knew about the past history and the cattle marketing lawsuits Mike had been involved in and everything, but being able to see firsthand the future of the farm unfolding and how it’s setting the path for other farms, that was just an incredible experience,” he said. (Read more of his reflections, HERE.)

Gish traded out part of his time at the workshop with another member of the Linger waitstaff, Eric Goodline. The two are supporting the development of an eco-friendly orphanage and library in Nepal through the Seeds of Change Foundation, which Gish founded.

Other participants came from farther afield. Skyler Adamson works with a community orchard and edible landscaping project in Lawrence, Kan. Peter Allen is a former ecology professor from Madison, Wis., who wanted to put his preaching into practice by starting a successful sustainable farm and meat CSA. Justin Bramhall runs a retreat center an hour and a half south of Tucson and dreams of transforming it into an ecological demonstration site.

Jenny Bowen, a musician and local food advocate from Wichita, Kan., hopes to apply what she’s learned to a community farming project in that city. Reading about the concept of regenerative agriculture lit her fire to learn more about it, she said.

Cassandra Noel, of Santa Fe, said she was drawn by the workshop’s emphasis on holistic planning. She’s become increasingly interested in the nexus between soil health, food production and climate change. She’s also an interfaith minister who looks at education, health and land management through a spiritual lens.

No one traveled further to be there than Adam MacLean, who came all the way from Prince Edward’s Island, Canada. His attendance was mostly a function of timing, since once the growing season gets underway he’ll be too busy to leave the land he manages back home. He hoped to begin applying some of the things he’d learned immediately on return.

“I’ve done lots of education in this space, but I hadn’t been to one of Darren’s courses before,” he said. What sets Doherty’s training apart? It’s “pragmatic” and “grounded in reality,” MacLean said, a view echoed by other attendees as well and testament to Doherty’s reputation for creating functional, workable designs.

Joe Johnson was charged with recording the daily proceedings on the Regrarians’ REX2Kansas Facebook page. He is a nondenominational minister from Arizona and has done developmental work in Haiti. “I want to learn about this but I’m still not entirely sure how I’ll use it,” he said. “What I do know is this training brings together people who have a real social dimension to what they do. I don’t think you can get here without that.”