Real U.S. shrimp in store and on menus in Colorado Springs 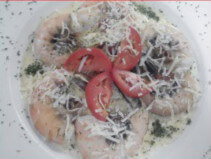 THE SCOOP: Want real American shrimp? Ranch Foods Direct makes it easy to support American fishermen and buy high quality American seafood. The store continues to offer a great winter special on beautiful wild-caught U.S. shrimp priced at $12.99 per pound. The supplier is Richard Gollott, a Mississippi shrimp processor who serves on the board of directors for the American Shrimp Processors Association. The multi-generational Gollotts are hailed as one of the seafood industry’s founding families, possessing a long and colorful history on the Mississippi Gulf coast.

“My grandfather started in the business, and he had five sons who all went into the business, and their sons all got into it. We’ve now got it whittled down to where there are two siblings remaining in the business,” Richard says. The family started out processing and selling oysters and crabs, and, over the course of four generations, wound up in the shrimp business that continues today.

“During the season, we put in 18 hours a day, and it’s a lot of hard work,” Richard says. “The boats will stay out for a month at a time and fish all day.”

THE BACKSTORY: Having a convenient source of true U.S. wild-caught shrimp is far more rare than most people realize. More than 90 percent of the shrimp consumed in the U.S. is imported from foreign countries, according to David Veal, the executive director of the American Shrimp Processors Association. “It’s everywhere,” he says. “When I’m in a restaurant I always ask about it, and I have never been told that their shrimp is imported. But if I continue to press it, and they go to the back and bring me a box or a label, we often discover that it is imported. One of the slickest tricks they use now is to say it is from the Pacific Ocean. Most of the farmed shrimp comes from there, but virtually none of the U.S. shrimp is caught in the Pacific Ocean. “Go into a Red Lobster restaurant sometime,” he adds. “It is decorated with quaint pictures of shrimp boats in Maine, which makes it look like everything is caught here. In fact, virtually none of what they serve is.”

REAL DEAL: Ranch Foods Direct partner restaurants have a chance to showcase genuine U.S. Gulf shrimp on local menus. Just one example is shrimp from Ranch Foods Direct, beautifully prepared and presented by the Tabequache Steakhouse in Woodland Park. Why settle for less?