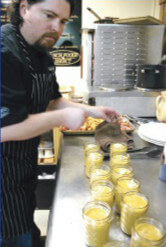 Pop-up restaurants — temporary dining establishments that sprout in shops, factories, private homes and other unlikely or underutilized spaces — are a worldwide culinary phenomenon, and now Ranch Foods Direct is playing host to one of its own. Chef Kevin Campbell will be “popping in” several nights a week, to transform the Ranch Foods Direct store into an intimate fine dining spot starting in mid-January.

“It will be something Colorado Springs hasn’t seen and desperately needs,” the chef says. “I want it to be thought-provoking, an opportunity to really consider where food comes from, and how we handle it and prepare it.”

“Think of it like this,” he adds, “the chef will be in the dining room with you. I’ll answer questions and participate in the conversation. This is all about building relationships and establishing a sense of community.”

Groups or businesses can book parties of up to 20 at a time, but individual diners or couples are also encouraged to sign up.

Typical dinners will include three courses with lots of food served family style. Kevin plans to provide complimentary Colorado wines. “Come hungry — I like to feed people,” he adds.

Kevin is taking reservations by phone or e-mail and plans to serve his first dinner on or near January 19.

Serving up food for thought Pop-up restaurants have caught on due to the financial benefits of repurposing a space and the fun experiential nature of eating out in an unusual or unexpected atmosphere. One source of inspiration behind Kevin’s new venure is Talula’s Table, a gourmet food market and cheese shop in Pennsylvania that also hosts farm-to-table dinners.

Kevin plans a “rustic” casual vibe with prices in the affordable $50 to $60 per person range, which should draw a wide-ranging clientele to experience his inventive cuisine. (His take on steak and eggs is a deep-fried “hush puppy”-like soft-boiled egg served over a slice of prime rib.)

Dinners will feature many Ranch Foods Direct items, and diners will have the chance to purchase the ingredients before heading home. Like Ranch Foods Direct founder Mike Callicrate, this chef possesses what is sometimes described as a “radical” commitment to locally sourced, less processed food.

“This is something I believe in and am passionate about,” he says.