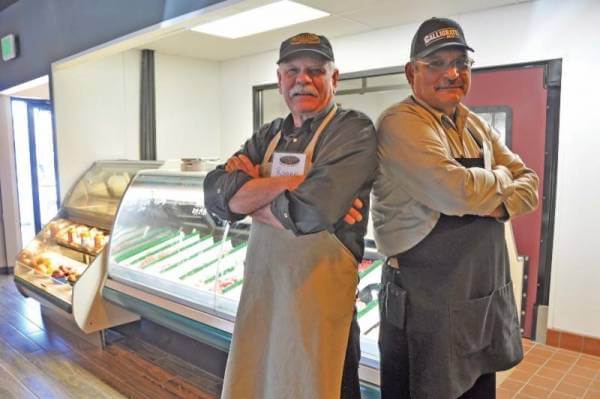 One of the first things to catch the eye of shoppers entering the new Ranch Foods Direct store at 1228 E. Fillmore is likely to be the gleaming fresh meat case staffed with experienced butchers standing at the ready. The approach is something of a throwback to earlier times, but it also signals a shift in consumer tastes back toward a more personalized, transparent food system.

“People like this, especially since many of them don’t know much about where their meat comes from anymore,” says Roger Wichman, above left, a life-long butcher who helps oversee the fresh meat case. “These days they want to know more about their food and how it’s made.”

SHOPPERS MIGHT BE PLEASED but the butchers working behind the counter are happy about it too. They’ve watched the meat business change in ways that deskilled their work, greatly diminished their creativity and autonomy, and distanced them from the customers they serve.

“When I was growing up in the ’50s, my mom would send me to the corner grocery store with a list, and the butcher was usually the owner of the market,” recalls Joe Yanez, above right, who also works behind the fresh meat counter. “Now what you have are big conglomerates with boning and processing plants filled with 200 or 300 cutters, each doing one thing only. It’s a production line. Here at Ranch Foods Direct, you’re not just portion-cutting a single item, you’re answering questions from people, making suggestions on which cut to buy and how to prepare it.”

Roger says as supermarket chains got bigger, he watched meat quality suffer. “They don’t care about their product, they get it wherever they can get it cheap. It’s not like Mike’s beef, locally raised. I decided to retire because everything was pre-cut. The hamburger meat would glob up, it wouldn’t crumble like the fresh ground burger we have here.”

Roger and Joe both started their careers years ago when small locally owned meat packing companies were still the norm. Roger landed his first job at Pig-in-the-Sack at Deckers when he was 18. “I got married young, and I had to find a job. I did a lot of grunt work but I learned how to make sausage too,” Roger recalls.
Joe got his start at Liberty Packing, another local company. “The building no longer stands,” Joe says. “They closed the plant in 1979, and then I got a job with G&C Packing Co. (also now closed.) I worked for them for about eight years. I learned a lot there, including how to break beef.” Eventually, he, like Roger, got into the retail side of the business to advance his career.

“When I got a job at King Soopers, one of the first guys that I cut meat with was Roger, 26 years ago,” Joe says. The two stayed in touch and following corporate retirement they both each found their way to Ranch Foods Direct, where they were reunited. “I was bored to death,” Joe says of his trial retirement. “When I walked through the door, Roger said, ‘What took you so long?'”

Both seem grateful to have found a place that values their experience and still treats cutting meat as an artisan craft, one dependent on a diversity of finely honed skills.

Come by and say hi… the butchers are happy to cut your meat to order and answer any questions.