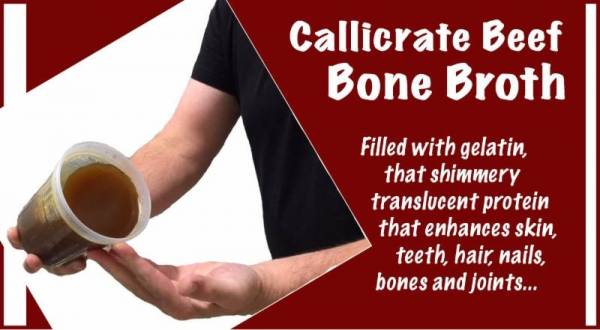 It’s even caught on as a beverage, according to a New York Times article, “Bone Broth Bliss.” Some bars now feature broth “flights” and customized broth drink flavors. Chef Marco Canora (author of the cookbook, A Good Food Day) swears by its transformative health effects. “Instead of sipping coffee all day and wine all night, I started walking around with cups of broth of my hand,” Canora says in the article.

“It’s been known through history and across cultures that broth settles your stomach and also your nerves. When a recipe has that much tradition behind it, I believe the science is there too,” adds Sally Fallon Morell, author of Nourishing Broth: An Old Fashioned Remedy for the Modern World.
Among true broth aficionados a jiggly, gelatinous broth is considered the gold standard. Why? Since gelatin “gels” when cooled, a gelatinous texture indicates a high level of the rich protein that enhances hair, bones, teeth, skin, nails and joints. (If a broth doesn’t gel that likely means it’s diluted by a higher ratio of water.)
Ranch Foods Direct bone broth meets the gold standard. It’s slow simmered in small batches and contains bits of roasted meat (but no artificial preservatives.) It comes from cattle that are naturally raised and fed, processed on-site and handled with care at Callicrate Cattle Co. (Allow for one day of thawing time in the fridge.)