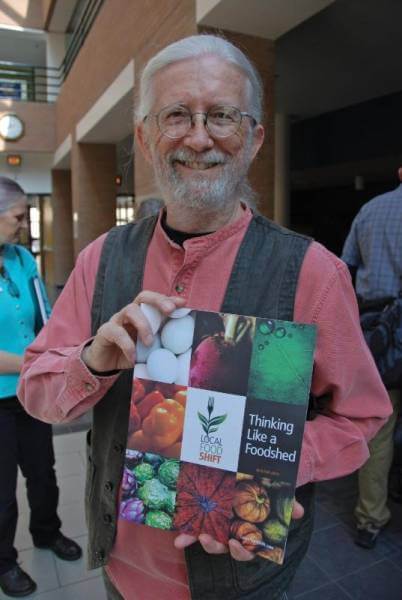 Catalyst. That’s the job title listed on Michael Brownlee’s business card. That’s also the role he hopes a new magazine will play in a long-term effort to shift the Colorado Springs economy toward more locally-owned growers and processors like Ranch Foods Direct. In remarks Brownlee made last fall at Colorado College as part of Local Food Week festivities, he emphasized that local food offers social, environmental and spiritual benefits, not just financial ones.

WHAT ARE YOU WORKING ON NOW: “Local Food Shift is a non-profit organization that helps to catalyze localization of our food supply. We’ve been doing that for the past eight years. But now we’re focused exclusively on creating a Colorado magazine that will be at the center of the local food movement and its emerging industry. We feel like we can accomplish more with a well-designed publication than anything else.”

COMPARE IT TO EDIBLE FRONT RANGE. AREN’T THEY USING A COMMUNITY BASED PUBLISHING MODEL? “We’re in a different niche. Edible Front Range (available at Ranch Foods Direct) is much more about gourmet foods than about localizing our food supply. Our publication will be very specific to the topic of how do we rebuild the infrastructure for local food that is missing right now? Less than 3 percent of the food consumed in Colorado comes from Colorado. We’re working to increase that number.”

WHAT HAS RANCH FOODS DIRECT BROUGHT TO THE LOCAL FOOD SCENE? (Owner) “Mike Callicrate is one of our heroes. To me, he is one of the most important voices in agriculture today anywhere in this country. We listen and take notes on what he’s saying. If he was just building a business, that would be one thing, but he is one of the true food leaders in Colorado Springs. It’s coming from his heart. We’re very fortunate to be able to learn from him.”

DESCRIBE YOUR PERSONAL APPROACH TO FOOD: “Over the last few years our primary source of food has been a CSA (community supported agriculture program.) We (he and Lynette Marie Hanthorn, co-founder of the Local Food Shift Group) belong to two CSAs and share a lot of the food we get with our neighbors. We don’t go to a supermarket anymore, we just don’t. We garden at home. But the biggest change we’ve made came in the last few years. We were both vegetarians, for 20 years or so. We felt very uncomfortable in not supporting local producers of animal protein. So we became recovering vegetarians. It’s just been a natural progression for us.”

TELL US MORE ABOUT THE MAGAZINE: “We plan to start out by publishing six times a year with about 76 pages each time. We expect to grow that to more than 200 pages over the next couple of years. Where we are ultimately going is that it will be membership-based. Your membership will include a subscription to the magazine as well as discounts from advertisers and exclusive online content. The theme we are looking at right now for our first issue is seeds and sprouts, which is metaphorical: it means new developments in our foodshed. Our first issue should come out by early June, the same time as the Slow Meat conference in Denver (hosted by the Slow Food organization.) We see that as a very important event in terms of formulating a discussion around the role of animals in local food agriculture.”