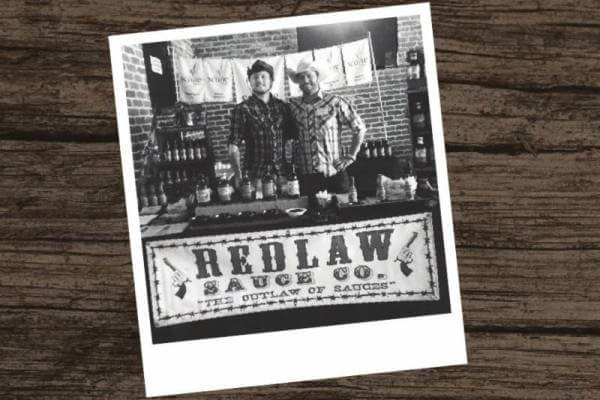 Justin Chinchen, shown at right in photo above sampling sauce with his brother Josh, creates complex barbecue sauces that partner well with Callicrate meats, including brisket, pork ribs or even baked Alaskan salmon.

ON WHAT MAKES HIS PRODUCT UNIQUE: Most commercial sauces are what Justin calls “dump-and-runs:” everything is poured into a vat, brought up to temp and bottled. At his Redlaw Barbecue, the sauces are small batch made and chef-driven. “The way we do it is more like preparing sauces on the stove, so you end up with a lot more layers of flavor. And we use dry fruits for our sweeteners, which lowers our sugar content, as well as agave, pomegranate juice and other alternative sweeteners.”

High fructose corn syrup is on their outlaw list. “We don’t allow it in our processing facility. A lot of times it’s used to cut costs, but look at the adverse effects it has on our economy and our kids! More companies are realizing they don’t have to use it. There’s an amazing movement that’s happening right now in this area, and we just want to keep it growing. The more people support this trend, the more affordable it will get.”

THE BACKSTORY: Before moving to Golden, Colo., Justin worked on a horse ranch in California, and once a week, for extra rent money, he’d cook dinner for the ranch owners. On the day he made whiskey tart cherry ribs, he heard the words that have launched many an artisan food business: “You should bottle this stuff.” The resulting whiskey sweet cherry sauce became the original sauce in his line-up. When Stan Walder, the owner of the ranch, later died unexpectedly of a massive aneurysm, Justin sought permission from his wife to name his own company Redlaw in honor of the Redlaw Ranch where the story of the sauce first began.

Of the whiskey sweet cherry, Justin says, “There’s a very special technique to it. There’s a shot of bourbon in every bottle.” The mixture includes ingredients like caramelized onions and garlic and mustard seeds that are carefully cooked down over a long period of time to create dense, rich flavors.

“The blackberry pomegranate is actually something we developed for the holidays,” he adds. “It has a subtle cinnamon finish. We wanted to have a holiday barbecue option that would go well with turkey, ham and duck. It also works great as a regular sauce for brisket and short ribs.”

While the popular option is to glaze meats on the barbecue grill, Justin prefers to serve the sauces on the side for dipping: “I’ll make a nice steak, with salt and pepper, and then dip the steak in it.” Justin also uses them on salmon: “After searing the salmon filet in a pan, I’ll put a little layer of barbecue sauce on it and finish it in the oven,” he says. Ranch Foods Direct has sampled it on St. Louis-style pork short ribs, with outstanding results.

WHAT’S NEXT: Justin has started providing co-packing services to other artisan food businesses, much the way Ranch Foods Direct provides packaging and labeling for small ranchers who want to get their own products out into the marketplace.

“We joke that we have a one-gallon minimum,” Justin says. “We’re kind of a bridge, that’s how we look at ourselves. It’s hard for a ma-and-pa-business working out of a local commissary to take that leap to the next level. Here, they can do a 50-gallon run and scale up slowly. We’re really opening this thing up for a lot of people who want to start new food companies. There are just no resources out there to help them, so we simplify the process and provide all the services they need at an affordable price.”

“Our motto is go little or go home. For businesses that are small and locally focused, there’s no one out there doing what we’re doing. We help them scale up while sticking to their core values and staying true to where they started from.”

Pick up some Redlaw barbecue sauce when you shop the store and check out the savings on a wide assortment of Callicrate beef and pork bundles! Buy in bulk and save.