In June, a grill demo for dad’s day, plus guest chef debuts at Peak Bowl 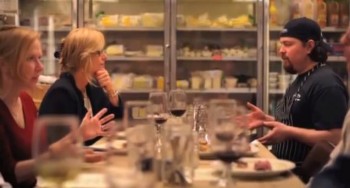 Just in time for Father’s Day, Palmer High educator Sharon Nemeth will present a cooking demonstration at Ranch Foods Direct featuring what she believes just might be the ideal Father’s Day dish: a grilled beef tenderloin, served thinly sliced and stacked on a mini-bun topped with a tasty blue cheese sauce. The demonstration will be 11 a.m. on Saturday, June 18, at the grill in front of the Ranch Foods Direct store. Everyone attending the demo can enjoy a sample “slider” along with the featured side dish.

Sharon teaches family and consumer studies in Colorado Springs’ largest school district, District 11, in addition to advising the ProStart program, which prepares students for culinary careers. What once was called “home economics” has evolved into a curriculum that emphasizes food science and healthy family relationships.

“Instead of just offering them a cooking class, the things they learn now are really important, like how their diet affects them,” she says. “Kids are really starting to think about what they are putting in their bodies.” District 11 is a leader in serving local food and hired an executive chef last year. “We watch films like Fresh! and talk about what D-11 is doing to promote healthy food,” she continues. “Mike (Callicrate) has come down and talked to my classes, and I give writing assignment based on his information.”

So will Sharon be making a tenderloin for her father on June 19? Sadly, he passed away last year, but she and her girlfriends — many of them in similar circumstances — plan to celebrate in their own way. She has started a tradition of hosting what she calls a “Fatherless Day” dinner and all-girl party. Actually, her father dropped in on it last year and had a great time. “He thought it was a great idea,” she says.

Strike a great lunch, at local bowling alley
Chef Kevin Campbell, who specializes in “traditional, local, real food prepared with modern techniques,” makes his Colorado Springs debut with a special lunch menu that will be served four days a week at the Peak Bowl starting in June: “It will be amazing food that’s affordable.”

A Houston native who grew up in the Springs and spent several years as a culinary professional in Arizona, Campbell’s key cooking influence is his French, Italian and Southern U.S. ancestry.

“In our family, cooking is big and so is celebrating life,” he says. “We don’t typically go out to a restaurant for dinner, we go over to grandma’s house or to an uncle’s. I believe in bringing people together around the table.”

Campbell’s been invited to demonstrate his talents at the Peak Bowl, which shares his commitment to Callicate Beef. He calls it the best he’s tasted in his 15-year career. “I do a fantastic four-hour Callicrate Wagyu rib-eye and a 24-hour chuck roast that is fall-apart tender and medium rare. I’m planning to do a Callicrate Black Label burger, made from dry-aged beef short rib and chuck roast ground up in-house.”

“The Peak Bowl owners were already sold on Callicrate Beef, so I didn’t have to try to convince them,” he adds, a key that sealed the deal.

Campbell is donating part of the proceeds from the venture to a local charity, Fostering Hope, which assists foster families.