How do we grow more farmers? A new film takes a closer look

The uplifting scenes in Graham Meriwether’s new film, Farmers for America, clash with a sobering reality: high land costs and low prices are making it hard for the next generation to break into farming. Following a screening of the film at Ivywild School on July 18, a panel of family farm advocates urged the audience to buy local and buy direct from farmers whenever possible. “We need a fair market. I’m fighting for that,” said Ranch Foods Direct owner and rancher Mike Callicrate, who appeared on the panel.

He was joined by Nick Lewandowski, a policy specialist with Rocky Mountain Farmers Union (below, from left) and area farmer and Ranch Foods Direct supplier Will Frost. Filmmaker Graham Meriwether served as the moderator. 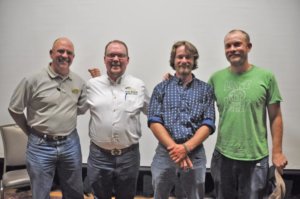 Meriwether is already at work on his next film, which will explore how to meet the challenge of feeding the world with regenerative agricultural practices. It will likely contain video footage shot at Callicrate Cattle Co.