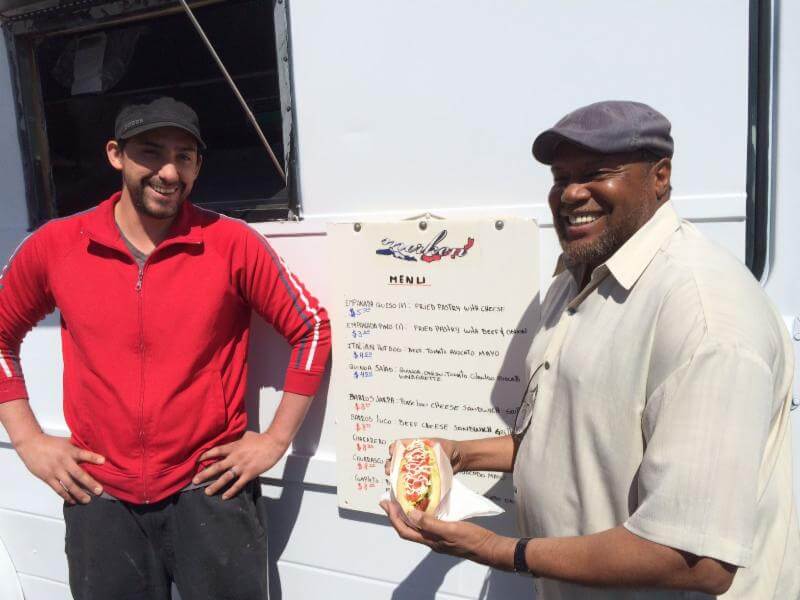 Cinco de Mayo (the fifth of May) is observed widely in America as a celebration of Mexican food and culture. Unfortunately, many Americans assume all cuisine south of the border is of Spanish origin and similar in style and flavors to Mexican cooking. Not so, says Pablo Bonacic, a native of Santiago, Chile, and owner of the Merken Food Truck. (Shown in photo.) Pablo’s truck can often be found parked at Ranch Foods Direct at mid-day Monday through Friday. In late April, he teamed up with Chef Kevin Campbell of Full Circle Cuisine to present a special Chilean themed pop-up dinner at Motif Jazz Bistro in Old Colorado City.

Pablo believes his food truck is the only one serving Chilean cuisine in all of Colorado, so part of his mission is educating his customers about what Chilean food is.

“A lot of people think my food will be spicy. They think all Spanish food is Mexican, and it’s not,” Pablo says. “I can make it hot, but our food is not typically hot, or at least not hot enough to make you sweat or anything like that. It’s flavorful. And we use bread instead of tortillas. Our starch is mostly wheat, whereas in Central and Latin America, it is mostly corn-based. We are actually the number-one bread-eaters in the world. In Chile, there is a bakery on every corner. We eat a lot of sandwiches.”

As a connoisseur of bread, Pablo prefers what Shawn Saunders is baking on site at Ranch Foods Direct to anything else he has found in the Springs. “I like Shawn’s bread,” he says. “I like that it’s really simple: water, flour, yeast and salt. That’s the kind of bread I like. And it’s got a homey look to it – every loaf is not the same thing.” (Get your own, baked fresh daily, at Ranch Foods Direct!)

As for the meat he uses, Pablo was thrilled to cut a deal with Ranch Foods Direct that allows him to source Callicrate beef and pork exclusively. He is also experimenting with adding Chilean flair to Callicrate burgers as well as hot dogs. “We don’t eat hamburger in Chile, we eat steak,” he says. “I use a chuck roll cut in nugget-sized bites and barbecued for my beef sandwich. It has a nice chewy texture. And of course I add Merken spice to all of my meats.”

Pablo named his truck after the spice, which is one of the most iconic elements of Chilean food. It is difficult to get here in the states and still unfamiliar to many, despite being named the spice of the year for 2013. It’s essentially a sun-dried and smoked red chili, grown exclusively in southern Chile, that is mixed with cumin and coriander. The pepper is hot, but you get so little of it in the spice that the heat is muted. Interestingly, however, if you heat oil in a pan for a saute and sprinkle in merken, the heat that burned off in the drying process is restored. In Pablo’s traditional-style barbecue sauce, however, oil is left out so the heat remains restrained.

His top-selling steak and pork loin sandwiches are served with fresh tomatoes and an avocado mash. They are best accompanied by a quinoa salad made with a light olive oil dressing. As the temperatures rise, Pablo expects salad sales to go up: “It’s really the perfect refreshing summertime salad,” he says.

And of course he makes and sells empanadas! Found in multiple variations around the world, what differentiates them from each other is the spice used to season the meat, Pablo says, as well as how they are cooked. His are typically fried, although he’ll make a baked version, for those who order in advance.

Find updates for Merken Catering and Food Truck of Colorado Springs at www.Facebook.com/MerkenChile

Special recipe: Chilean Beef & Corn Casserole (Pastel de Choclo)
Pablo Bonacic, owner of the Merken Food Truck, compares this unique Chilean dish to shepherd’s pie. It doesn’t turn out quite the same when made in the U.S. because the corn here isn’t as hard as corn grown in Chile. As a result, it’s difficult to get the right crust-like consistency from the topping that goes on the filling, he says. Still, it might be fun to try.

Sauté the onions in the vegetable oil until soft and translucent, 5 minutes. Add the ground beef, cumin, 1 teaspoon salt, and pepper. Cook, stirring, until the beef is crumbled and browned. Remove from heat and set aside.

Place the corn kernels in a food processor or blender with 1/4 cup milk. Process for 1 to 2 minutes, until corn is blended and appears creamy. Melt 1/4 cup butter in a pan, and add 1 teaspoon salt, 1 tablespoon sugar, and the corn mixture. Add the remaining 3/4 cup milk and simmer, stirring, until mixture thickens, about 5 to 10 minutes. Add the chopped basil and remove from heat.

Preheat oven to 375 degrees. Drain the liquid from the browned beef mixture. Place the ground beef mixture in the bottom of a 3 or 4 quart casserole dish. Sprinkle raisins, olives, and hardboiled eggs over the beef, then layer the chicken on top. Spread the corn mixture over the top of the casserole so that it covers the rest of the ingredients. Sprinkle the powdered sugar on top. Bake in the oven for 30 minutes, until the corn mixture is golden brown. Serve warm.