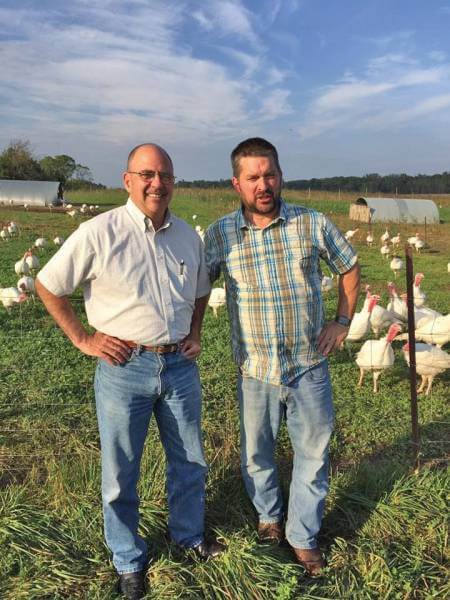 During the holiday season, Ranch Foods Direct will offer customers a choice of turkeys from Red Bird Farms of Denver, priced at $3.99 per pound, or from Gunthorp Farms, priced at $5.99 per pound.

Described as “one of the best-known and most desired high-end meat brands in the Upper Midwest” by Graze Magazine, Gunthorp Farms is a small family-run operation in northern Indiana very similar in method and philosophy to Ranch Foods Direct’s own Callicrate Cattle Company.

Gunthorp Farms illustrates that the politics of food – like any other – sometimes requires taking a stand and firmly planting a foot. While family patriarch Greg Gunthorp watched the agriculture industry changing around him, he committed himself to two goals: 1) he would not be the last generation of his family to farm the lush rolling hills of northern Indiana; and 2) he would not be the first to raise livestock in large confinement systems.

Since then, Greg has emerged as a national leader in the local food and farm-to-table movement with special skill in the art of raising pastured pork and poultry. He and his family adhere to regenerative farming practices designed to optimize the health of the land and livestock. He built his own USDA-inspected processing plant so he could process his animals right at the farm. Leading chefs soon took notice: his meat has been served in some of Chicago’s most famous restaurants, including Rick Bayless’s Fronterra Grill and the former Charlie Trotter’s.

In October, Greg and his family invited Ranch Foods Direct owner Mike Callicrate to tour their farm and to participate in a round-table discussion with officials from USDA’s Food Service Inspection Service. They and other small farmers and processors had the chance to share their concerns about bureaucratic and regulatory hurdles that are forcing small slaughter plants out of business.

Without small plants, small livestock farms cannot remain viable, Mike emphasizes. “The lack of small processors serving family farm agriculture is really hurting the local food movement,” he says. “It’s becoming virtually impossible to find free-range turkeys in Colorado because so many small farms have either gone out of business or stopped raising them because they have nowhere to go to get the birds processed.”

GOBBLE GOBBLE: Ranch Foods Direct will have fully cooked, smoked turkeys and Callicrate Pork hams in a variety of sizes for sale throughout the holidays. Pre-order available now; turkeys begin arriving in mid-November.

DID YOU KNOW? When selecting a turkey, figure on enough for one pound of meat for each dinner guest. Ranch Foods Direct has a detailed tip sheet and turkey roasting instructions; pick up the info in store.