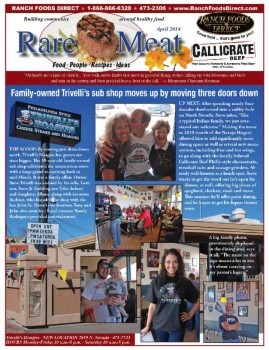 UP NEXT: After spending nearly four decades shoehorned into a cubby-hole on North Nevada, Steve jokes, “like a typical Italian family, we just overstayed our welcome.” Making the move to 2819 (north of the Navajo Hogan) allowed him to add significantly more dining space as well as several new menu options, including fries and hot wings, to go along with the locally beloved Callicrate Beef Philly-style cheese steaks, meatball subs and sausage grinders. Already well-known as a lunch spot, Steve wants to get the word out he’s open for dinner, as well, offering big plates of spaghetti, chicken, steak and more.

This summer he’ll offer patio dining, and he hopes to get his liquor license soon. A big family photo, prominently displayed in the dining area, says it all. “The name on the sign means a lot to me. It’s about carrying on my parent’s legacy,” Steve says.

CLICK HERE to view the article and photo collage, shown above.