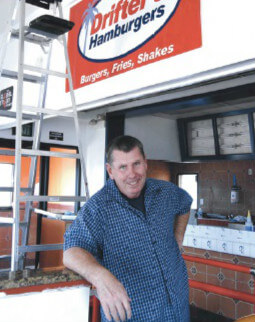 CLAIM TO FAME: Locals love Drifters’ award-winning California-style burgers and shakes along with breakfast burritos made with real eggs — food that’s affordable and fast and features quality ingredients like Callicrate Beef. “Our motto is ‘restoring the reputation of the fast food hamburger’,” says owner Richard Beaven.

THE SCOOP: It’s been four years since Richard Beaven opened his first Drifters location, and he’s been interested in expanding to the Chapel Hills Mall area ever since. He also has his eye on the city’s south side. And he’s offering franchise opportunities nationwide.

THE BACKSTORY: No novice to the burger scene in the Springs, Richard ran the old Classics Hamburgers for ten years before selling it and going back to school to earn his MBA. But he couldn’t resist the burger biz for long, eventually brokering a short-term lease in order to try out the Drifters concept. “I wanted to put together the best fast-food hamburger,” he explains. “I started with Callicrate Beef because it was local, and I could get it delivered fresh five days a week. It was the taste that sold me originally; it brought me back to when I was a kid. My theory in business is always to give the local company the first shot, and I’m so lucky to have the best beef in the nation right here in town. If you’re just gonna do hamburgers, why not do the best burger you can? I’m on board with everything Ranch Foods Direct is about; I think they’re right about what’s happened to our food system. ”

HIGHLIGHTS: Richard uses whole leaf lettuce rather than shredded. His non-GMO buns come from Wheat Montana, a farmer-owned flour mill. There’s natural boysenberry fruit in the shakes and fresh locally-made Baja salsa to go with the morning burritos. “I think it’s worth it,” he says. “Other than that, we keep it simple: good meat and a good sauce.”