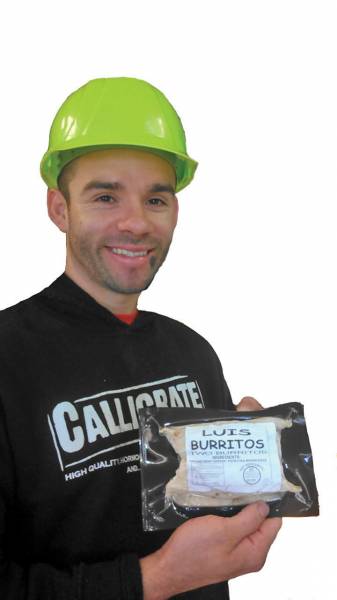 Even before the big announcement in May that Ranch Foods Direct would be moving most of its operations to a new home near Platte and Academy, Luis Guerra was busy making changes and improvements to the existing facilities, product inventory and other aspects of the business.

“I’m so excited about the new things that are coming,” he said recently.

Luis is probably best known to Ranch Foods Direct customers as the smiling face behind Luis’ Burritos, a combination of Callicrate ground beef, potatoes, black beans and cheese, sold in ready-to-heat-and-eat 2-packs for $7. (Look for them in the front freezer case.) They’re also served for breakfast at neighboring Colorado Coffee Merchants, 302 E. Fillmore. (Breakfasts there – which feature other Ranch Foods Direct ingredients as well – are served from 6 to 1 p.m. daily and have drawn raves from CS Indy food critic Bryce Crawford, among others.)

Luis fills many roles at Ranch Foods Direct, thanks to his eagerness to learn and willingness to provide leadership where needed.

“I’m glad I opened my mind to learning as many different things as I can,” he says. “Too many people only know how to do one thing.”

Luis joined Ranch Foods Direct seven years ago after running a taco restaurant. Since then he has helped with many aspects of the business, including most recently the management of plant operations.

Among the changes he has instituted in recent months is a decision to expand the sausage line and bring back the chicken gouda and chicken spinach flavors that have long been popular at Ranch Foods Direct. “A lot of people had been asking for them,” he explains.

Luis is nothing but appreciative for the opportunities he has been given since he joined Ranch Foods Direct and says he loves working with an owner who cares about the business and responds promptly to suggestions on how to improve facility design and work flow. “It’s a cool thing. I really appreciate being part of this,” he says. “Mike’s not just telling us what to do or how to do things but he works with us to help find solutions for making things work better.”