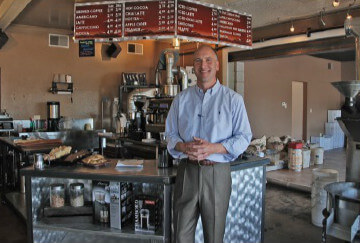 THE SCOOP: Eric Umenhofer, owner of Colorado Coffee Merchants, shown in his shop on East Fillmore, right, is in the midst of an expansion that will nearly double his space. It could be close to a year before Eric has everything just the way he wants it; however, starting in August, he plans to begin offering more coffee tastings, educational classes and eventually an espresso bar, allowing guests to compare and savor a wide variety of fine beans and brewing methods while learning to tease out flavors like “mild honey,” “baker’s cocoa,” “rich jam” and “hint of tobacco.”

THE BACKSTORY: Colorado Coffee Merchants and Ranch Foods Direct have been neighbors and supplier-partners for nearly 10 years, growing together along the way. Located just down the street from RFD, Eric imports premium beans from top coffee-growing regions of the world in small batches and roasts them on site.

In recent years, Callicrate Beef and Eric’s Ümpire Estate brand coffee have appeared together on menus at many discriminating dining establishments around town. In fact, Umenhofer retired from firefighting three years ago to focus on his coffee business full-time (though he still provides fellowship and a hang-out spot for his many friends at the fire department.) Regulars enthuse about the camaraderie and shared energy that fills his shop, which is set along the same strip of asphalt where fast food chains are (sadly) the norm. He provides an alternative, a locally owned place to grab a locally made pastry or, better still, one of Luis’ famous breakfast burritos, made with ingredients from Ranch Foods Direct. Eric is thrilled with the support he’s received from the community and the business’ steady growth; he supplies at least 50 restaurants and has around 100 wholesale accounts in all.

UP NEXT: One of Eric’s more unique and exciting supplier relationships is with Lyn Harwell, who is bringing a new dining concept to Colorado Springs. Harwell is on the board of the One World Everybody Eats Foundation and is in the process of opening the first paywhat- you-can nonprofit cafe slated for a Pikes Peak Avenue storefront downtown. “We think we can have two or three of these in the Springs eventually — all with Colorado Coffee Merchants and Callicrate Beef,” Harwell says. The emphasis will be on local food with hopes of eventually expanding into catering. He’s also excited about offering much-needed job training programs that will enrich the local community. Harwell is aiming for a mid-August opening. Stay tuned.