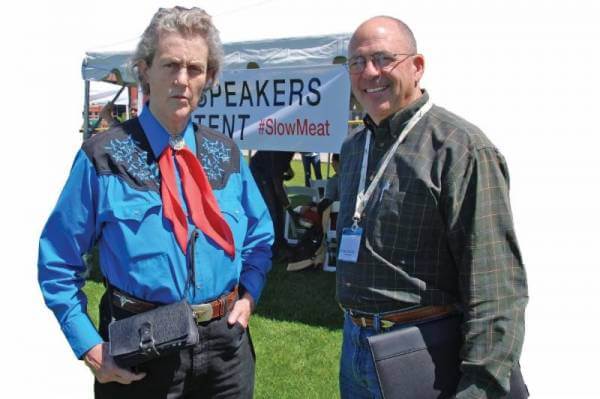 Back when farm-to-table marketing company Ranch Foods Direct was just a glimmer in owner Mike Callicrate’s eye, he began a lasting collaboration with author, writer and researcher Temple Grandin aimed at making ranch operations as humane for livestock as possible.

Grandin needs little introduction as the esteemed Colorado State University animal scientist who turned her affliction with autism into an asset by using it to gain groundbreaking insights into the sensory perception of animals, which led to new approaches to humane livestock handling. Her awe-inspiring story was widely circulated when it was included in an award-winning book by Oliver Sacks and later became the subject of an HBO made-for-TV film, starring Claire Danes. Over her career, she has published dozens of her own books and spoken before countless audiences on topics related to livestock handling, animal behavior, education and autism.

Mike began collaborating with Temple when she was still relatively unknown outside of agricultural circles. Over the years, her influence at Callicrate Cattle Company has extended to employee training, corral and facility design and advice on humane castration and slaughter procedures. Mike continues to call on Grandin and her team of graduate assistants in the process of developing new procedures and innovations at the ranch.

“We can always count on Temple to say exactly what she thinks,” he said. “She’s very clear and to the point. She doesn’t have a political agenda. Her only agenda is improving animal welfare.”

Grandin, who gives hundreds of presentations a year, spoke earlier this summer during the “Slow Meat” festival in Denver. She told her audience she cares about how animals are treated but she’s not a vegetarian, for health reasons. “I get so light-headed I can’t function,” she said of going without meat. Livestock benefit the environment by utilizing land unfit for farming crops. And substitutes for meat aren’t necessarily greener, she added. “Almonds are big water pigs,” she noted of one of the most popular replacement proteins.

Among today’s livestock welfare issues that bother her most is animals that have been bred for such fast growth or such high milk production that they have poor physical confirmation and lack disease resistance. She also has concerns about artificial growth promotants fed to cattle.

But there are more subtle problems, too, such as making sure that animals receive adequate nutrition, which could include supplementation with grain when forage quality is lacking. She also advocated using animal health products when appropriate to treat specific pests or diseases, for example lice or parasites. She said she had seen “fancy cattle going into fancy programs,” that were itching and scratching because they were lice-infested, highlighting the importance of experienced animal husbandry. In cattle that are underfed, she noted that poor quality meat often results. She explained that when muscles get too low in glycogen, due to lack of sufficient energy, it’s like “a car running out of gas.”

She also called for common sense food safety and livestock handling regulations. “Meat is not a sterile product. One of my big concerns today is that people are going into the policing arena who are too far removed from practical things.”