Bringing back barley as a feed grain crop 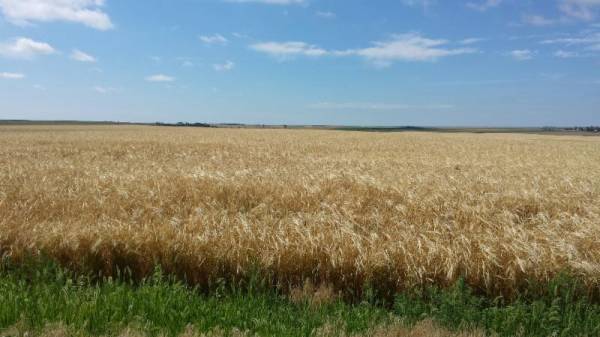 As a consequence of widespread monoculture cropping of corn and soybeans, other feed grains have faded from the landscape.

Now Ranch Foods Direct owner Mike Callicrate is leading the charge to bring back alternatives such as barley, one of the world’s oldest known cultivated grains.

Because of Mike’s interest in using barley in feed rations, more fields are appearing in the countryside surrounding Callicrate Cattle Co. (including the one shown above.)

“There are several good reasons to bring back barley,” Mike says.

“Barley is a high quality feed that is particularly good for animals that are on a no-antibiotics diet,” he says. “It has more fiber and doesn’t cause acidosis, which often results from a finishing diet that is too high in corn.” Barley is also higher in protein than corn, another characteristic that makes it extremely healthy for livestock.

In addition, barley benefits the land when grown in rotation with other crops. Farmers and scientists are learning that increased plant diversity improves soil quality and water retention and reduces topsoil erosion. It also fosters increased populations of beneficial soil micro-organisms.

Barley is a salt-tolerant species and is sometimes used for reclamation of saline soils.

Barley’s health attributes offer benefits for the land, the animals and, ultimately, people. “The most important thing is that barley is still a non-GMO crop,” Mike says. “Monsanto doesn’t sell it.”