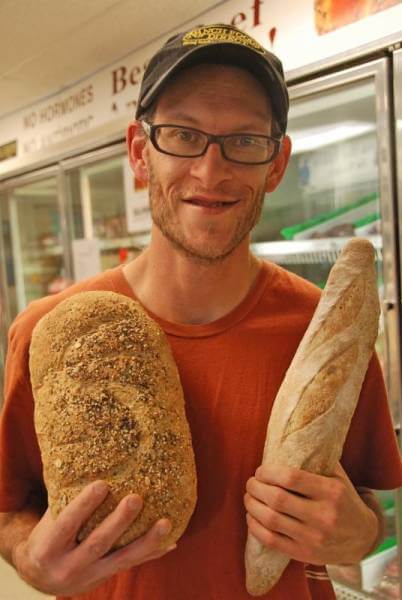 Shawn Saunders (above) is making special breads for the holidays, including dinner roll clusters, pumpkin brioche and pumpkin sourdough made from Ranch Foods Direct pie pumpkins he roasts himself. (Special orders can be placed at the store.)

WHY IT’S BETTER: As awareness has grown surrounding the potentially adverse health impacts of gluten specifically and carbs in general, the issue has also become more nuanced and complex. An article in the New York Times (When Gluten Sensitivity Isn’t Celiac Disease) summarized recent studies showing that a host of carbs found in modern foods – including fructose, lactose and polyols – potentially contribute to the constellation of symptoms commonly thought to be gluten sensitivity.

Gluten is the protein in wheat that gives bread elasticity and chewiness. And it’s not necessarily the primary factor causing modern bread’s poor digestibility. Shawn, an avid artisan baker, traces the rise of gluten-related problems to the invention of commercial yeast and to widespread distribution of mass produced breads “never touched by human hands.” In today’s hurry-up world, virtually all of the bread sold by chain groceries and restaurants is factory made and par-baked later. “As a country we’ve gotten away from doing things right,” Shawn says. “My sourdough base breaks down the wheat so your body can process it. I don’t even need yeast at all; half of my breads are yeast-free. And it definitely has health benefits. But it takes time, so bakeries don’t want to do it.”

Shawn uses real sourdough starter, though many of today’s commercial sourdoughs are made with chemical powders. His starter breaks down the sugars in the bread, making it safe even for diabetics to consume.
Magical life-imparting sourdough “mothers” can be long-lived; though Shawn’s is only four years ago, some San Francisco versions have been around for well over a century. “They are like Galapagos turtles,” he jokes.

UP NEXT: Shawn dreams of eventually milling his own flour. He’d also like to have a wood-fired oven. “The bread is 100 times different. It’s made on a hearth so the hole structures are even more irregular. It’s primal, like a good T-bone or bone-in ribeye.”