Art of the plate exhibited to fine effect at Amuzé 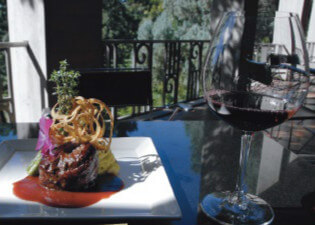 Bill Sherman was lured into leaving his pitch perfect little bistro in Palmer Lake by a Chihuly chandelier and a couple of Andy Warhols.

While the Colorado Springs Fine Arts Center was looking for a new chef to operate its art-festooned restaurant overlooking a pine-studded park in the shadow of Pikes Peak and its adjacent bar, lit by a colorful glass sculpture, Sherman came in for lunch and instantly fell in love. He submitted his own proposal, outlasted dozens of other candidates and in 30 days, he and his entire staff moved into their new culinary home.

“It’s a beautiful space, with wonderful history, art that’s food, and there’s free parking,” he says of its many charms.

Bill and his wife Susan had already melted hearts with their intimate 12-seat Amuze, getting glowing reviews for what some considered among the best meals of their lives with impeccable service to match. When Bill moved Amuze to the Springs, the critics returned and showered his new canvas with similar enthusiasm.

An engineer in his former life (Susan is also an engineer and has a globe-trotting job with HP) he melds masterful attention to detail with an artist’s sensibility and lively creativity. Everyone on his staff is trained in classic French technique. “The French make terrible cars, terrible beer, but they have the cooking thing down,” he laughs. He likes to take common dishes like beef bourguignon and embellish them into reprisals like bison carbonara. He is also expressing a flourish for matching the food to the Southwestern art deco backdrop that surrounds it with dishes like New Mexico red chili crème brulée. His new bar menu of small plates is intended to surprise and delight, each item for under $10. For example, he’ll serve smoked salmon under a smoke-clouded Mason jar or offer “bacon-wrapped bacon,” a playful jab at the idea that to make anything better, just wrap bacon around it.

At his new venue, he immediately began sourcing meat from Ranch Foods Direct. “We did side-by-side taste comparisons. It was amazing when we did the filets side-by-side. (Callicrate Beef) had an Old World taste, and the fat tasted more pure,” he says.

His presentation of the filet is truly majestic, almost too good to eat. He even bought a special plate — in the shape of an artist’s palette — to show off his “Tomahawk steak,” a bone-in ribeye beauty, which is served in a peach alspice demi-glaze at dinner. Expert wine pairings add the finishing touch.

At lunch, the Callicrate flat iron stars in a French dip sandwich and sliced steak salad. He’s also doing gourmet burgers with interesting accompaniments like peach salsa. “It’s a big hit,” he says. The menu is devoted to being local and seasonal, currently featuring produce from Dale Street urban gardens and zucchini blossoms picked from a home garden nearby.