Summer Recap: What we saw and heard at this year’s Slow Food Nations Festival in Denver 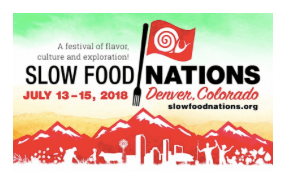 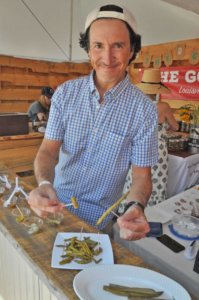 Among the hundreds of vendors that lined Larimer Square for Slow Food’s “Taste Marketplace” were several Ranch Foods Direct suppliers, including Eric Vierra, owner of The Good Jar, right. He recently introduced new pickled asparagus to his line-up (it’s highly seasonal, in limited quantities only) but his best-selling item is still his dilly green beans. Pick up a jar at the store anytime!

Greg Gunthorp, Ranch Foods Direct’s seasonal supplier of pastured turkeys, below left, appeared on a panel to discuss regenerative agriculture. The movement has been hurt by the decline of small meat processing plants and the rise of deceptive labeling by USDA, he said. Amazingly, due to a loophole in federal labeling laws, 75% of what gets sold as USA grassfed beef is actually imported from foreign countries! 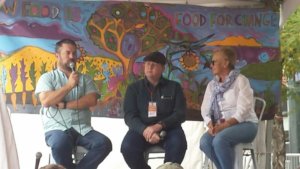 Another thing we learned: not only has a new publishing team rekindled the Edible magazine franchise that serves Denver, Boulder and Ft. Collins, there was even more good news: Mundi Ross (shown below, with her husband, Casey, a partner in local The Axe and The Oak Distillery) is launching Edible Pikes Peak, with the first issue expected to arrive by this winter. The ambitious founder of the sumptuous Colorado Collective magazine is sure to take hyper-local food publishing to a colorful and story-packed new level! 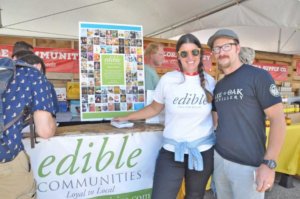