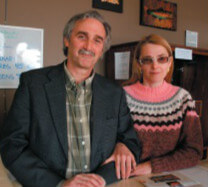 When I have beef, I can do anything. When I don’t have beef in the freezer, I feel like I don’t have food at home,” Irina Bertini is saying as she carries a sack heavy with Ranch Foods Direct meat. She’s not at the store in Colorado Springs, but rather at the Saturday farmers market she and her husband James started in a rustic old South Santa Fe warehouse near Denver’s popular urban arts district.

As James says, the Bertini’s are putting “their money where their mouth is” when it comes to local food by starting what is likely the only year round farmers market in the state. And busy as she is at the store space out front, Irina is now walking among the farmer-vendor-food artisans at Denver Urban Homesteading herself to do her weekly shopping.

Originally from Russia, she is a cook-everything-from- scratch kind of gal. A big believer in beef, who recommends its numerous health benefits (“it won’t make you heavy because the amount of energy it brings with digestion it takes for digestion”) Irina discovered in Callicrate Beef a much missed taste of home.

“When I came here, I was very concerned about food quality. Anytime I started cooking my regular foods, it smelled bad, and I couldn’t understand what was wrong about it,” she says, admitting that she’s used to eating meat from young animals and with the blood removed. “It’s nothing to do with religion,” she says, when I ask if she eats Kosher. “It’s just a way of having healthier food.”

Irina is convinced that rural peasants in many poor countries eat better than modern affluent Americans. She says there’s no need for convenience items.

“I like to cook beef with mushrooms,” she explains. “It’s very simple. If you have nice beef, you need some onions, half a pound of mushrooms, and nice olive oil. It doesn’t take a lot of time. You can have it ready in 30 minutes.”

Quality meat is important to the flavor of traditional dishes like Central Asian pilaf or Russian borsch, a soup made with cabbage and “a nice piece of beef with a little bit of bone in it.”

For a special treat, she likes to make Ranch Foods Direct bacon on Sunday morning. That’s their splurge.

There’s a little bit of “back to the future” in the increasingly popular notion of urban homesteading. “Most people no longer have a connection with food and how it’s produced,” says Bertini, who was dubbed a social entrepreneur by a University of Denver professor after founding his venture. “We’ve sanitized our cities to the point where many times it’s illegal to grow or raise food, even in small amounts that people could use to feed their families. If there was ever some kind of national catastrophe, and we couldn’t ship food around the way we do now, the people in Boulder County would be okay, but the people in Denver would be really hungry.”