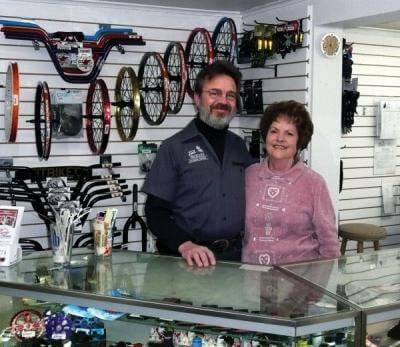 Tony and Joetta Hoewisch (above) own Ted’s Bicycles, which they purchased from the founders of the business, Ted and Ruth Wilber, back in 1986.

Thanks to their generosity, Ranch Foods Direct now has a new bike rack and a loaner bike for use at the store. Ted’s is located right around the corner (at 3016 N. Hancock) and offers sales, service and repair (everything except painting and welding) as well as lots of different bike gear. “We’re happy to welcome Ranch Foods Direct to the neighborhood,” Tony says enthusiastically.

Additionally, Tony shares some area history that reveals the Fillmore corridor has a long and rich tradition associated with food and agriculture.

“This area used to be called Papeton,” he explains. “There was a lot of mining from here on up northeast towards the Cragmor area, not gold mining per se but more coal and other minerals. The building that Ted’s Bicycles is in started out as the house the Venetucci family grew up in.” (Today Venetucci Farm is located south of town along Fountain Creek and is owned and operated by the Pikes Peak Community Foundation. It is a member farm in the Arkansas Valley Organic Growers cooperative.)

“I have a picture of the Venetucci brothers standing in front of the house that is Ted’s Bicycles today,” Tony says. “It doesn’t quite look the same because the building was built onto seven different times. The Venetucci family started small because that’s all they could afford. But this is where they got their start. Venetucci sweet corn was quite popular back then, and a lot of the land around here was owned by the Venetucci family.”

Tony and his wife are Ranch Foods Direct customers, drawn first and foremost by the cheese curds. “I’m from Wisconsin, and we used to always bring cheese curds back or have them sent from our favorite cheese factory back in my hometown of Fremont,” Tony says. Eventually a friend told him about Springside Cheese in Pueblo, which is owned by a member of a Wisconsin dairy family. “After she went down to see them in Pueblo, she found out they supply Ranch Foods Direct, which is right down the street from us. My wife had been in before for different items, but she hadn’t noticed the cheese curds. So it’s pretty cool. I took my cousins to the store when they came out to visit. One of them is still a dairy farmer back in Wisconsin. They were surprised actually by how good the cheese curds tasted. If a cheese curd has a squeak in it, that’s a good cheese curd. And they did. So everyone was quite surprised and pleased. Now I send people over to Ranch Foods Direct for cheese curds all the time.”

Ranch Foods Direct also carries goat milk cheese curds from Hi Plains Dairy. Did that sound like a sacrilege to a die-hard like Tony? Actually, no. “I’ll have to try that,” he said. “I was brought up on goat’s milk. My dad had three milking goats, and he always believed that goat’s milk was healthier than cow’s milk.”