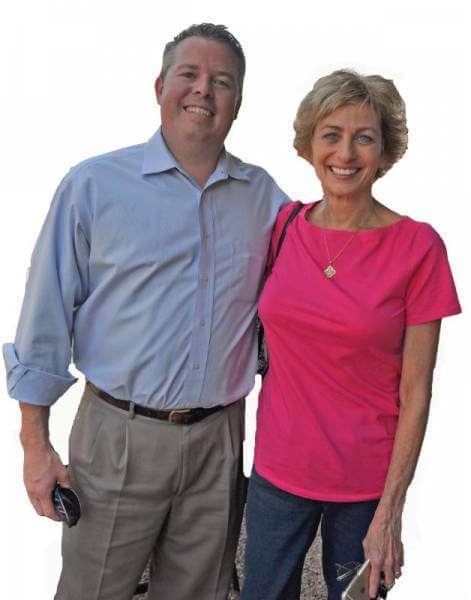 But first, here’s a little bit more about the Fostering Hope Foundation. Angela was a child abuse pediatrician in Wisconsin for 17 years and was involved in a clinic at a children’s hospital, which provided foster children with access to medical and psychological services. “Over the years, I got to know many of the foster parents, and I noticed over time they looked more haggard. They told me the kids were coming to them with greater needs, the resources were becoming less, and they were exhausted. Meanwhile, I was reading about these kids and the impacts trauma had on their development. These foster parents wanted to meet their needs, but they were quitting because it was just too hard.”

ANSWERING THE CALL Eventually a seed of an idea began to take shape. Angela’s parents, Nick and Margaret Colarelli, who live in the Springs, had started a small foundation, seeded with an inheritance from Angela’s grandparents, who were farmers. Capitalizing on Nick’s background in organizational management, they decided to devote the foundation to “hoeing the ground for foster parents,” as Angela describes it, in order to cultivate the conditions that would help foster kids grow and flourish.

Since then the foundation has started several trailblazing initiatives all designed to “stabilize, enrich and connect foster families,” as Scott says. Their latest program was created to assist foster kids who will soon be “aging out” of the foster care system in achieving a healthy, productive adulthood.

To explain the need, the two site truly dire statistics: 50 percent of foster kids wind up homeless within two years and account for roughly one-third of the existing prison population.

“That’s a curve we’re trying to change,” Scott says. “And we are doing it by having them cook together once a month with group of volunteers who are helping guide them. They are forming relationships as they cook together and eat together.”

Not everyone is called to be a foster parent or a program volunteer, but everyone can pitch in to help, he adds. “We are asking Ranch Foods Direct customers to donate a pound or a half-pound of meat to these monthly dinners,” Scott explains. “We need lots of ground beef or pork every month to make this happen.” Simply indicate your donation at the register when you check out and Fostering Hope will come by to pick up the donated meat. In addition, Ranch Foods Direct provides a “Pay-It-Forward Card,” which can be used for those who want to automatically contribute 5 percent from every purchase they make to the Fostering Hope charity.

“That’s crucial to us. We run on a really tight budget,” Scott said. “Our overhead is pretty much all donated, and our executive director and our president do not take a salary, so it all goes back to helping these kids.”

INGREDIENTS THAT PROVOKE MEMORIES OF HOME Angela and Scott both shop Ranch Foods Direct for products they say they can’t get anywhere else.

“I’m half Italian and half Irish,” Angela says. “My Irish grandmother was born and raised on farm and was famous for her home-raised food. She’s the one who taught me how to take a full chicken and cut it at the joints, the way butchers do, and to make really good Iowa fried chicken, pot roast and all those kinds of things.”

“My Italian grandmother was from the mountain region of Italy, and she was a scratch-cook as well. She also had a farm and an orchard. Sunday night was always homemade pasta night, with a sauce based on what was fresh for the season. My very favorite pasta dish is gnocchi, which is a potato pasta that usually has a pork-based sauce with it. I love the Ranch Foods Direct pork shoulder for that. You take your spices and put them into the fatty spots of the shoulder and as it congeals, the flavors ooze out into the sauce. It cooks all day, and when it’s done the pork just falls apart and makes the sauce thicker. Of course, I make meatballs as well. I always use a combination of Ranch Foods Direct ground veal, ground pork and ground beef to make my meatballs, because that’s how my grandma did it.”

She credits the store with making it possible for her get the perfect Osso Bucco veal shank.

“A lot of places don’t know how the cut it right, so you get a cut that’s really thick, but it’s too thick and it doesn’t cook well. You want to get it bone-on, marrow-in and you want it about two inches thick. At Ranch Foods Direct, they know.”

Scott is from New Orleans. “After Hurricane Katrina, my whole family got wiped up here by the flood. We lost 19 out of 20 houses in our extended family, and all of us moved out here.” Are they suffering from culture shock? Not really. “We still fish for crawfish. We just had to find them, but they are here. We catch them out of Eleven-Mile Reservoir,” he says.

“My favorite thing at Ranch Foods Direct is the Andouille sausage. It’s hard to get Andouille sausage that’s real and has just the right kick to it. If I had to pick just one product that tops my list, that would be it, because you just can’t get it anywhere else.”

“For us, everything starts with the trinity and a stick of butter,” he said. “Our trinity is onion, celery and bell pepper. You let them stew down in butter until they become translucent. It’s best to start frying down whatever meat you are using first, then pull it out before it’s completely done, and use that to cook your trinity in. To make our gumbo, we add whatever meat we want and okra and that’s it. It’s almost a sin to add anything else.”

A combination of duck and Andouille sausage makes the best gumbo, in his view.

“We cook and stew everything for a long time. You want to cook while you’re watching the Saints or LSU football,” he says with a smile. (He’s an LSU alum). “Start your dish before the game and at half time you’re ready to eat, so that usually means giving it a couple hours to cook. Another secret we have is that almost everything we make we put in the fridge for about four hours or so, just to let it cool down. When you re-heat it, that just adds another depth of flavor.”