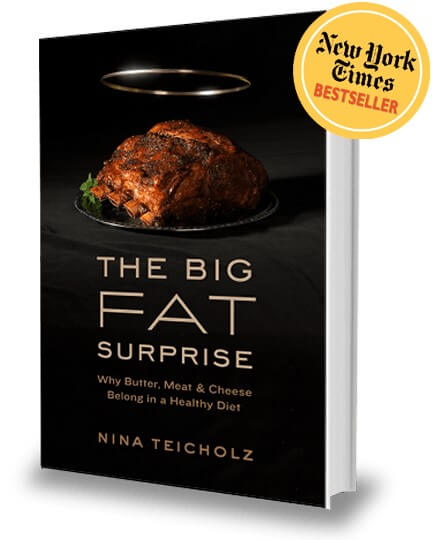 In the tradition of Gary Taubes, who won acclaim for his books and countless commentaries on the benefits of animal protein comes a similarly exhaustive exposé by an equally adept science writer. After publishing The Big Fat Surprise: Why Butter, Meat and Cheese Belong in a Healthy Diet, author Nina Teicholz summarized the book’s key takeaway message in an interview this way:

“Saturated fat cannot be shown to cause heart disease. People need to know that. More importantly, eating fat does not make you fat. It is an essential nutrient. And the emphasis on adding lean protein to one’s diet is unhealthy. We need the fat, especially saturated fat, ideally in a 2:1 ratio of fat to protein. You need to eat protein, but you need the fat that naturally comes with it to properly absorb the vitamins, minerals and the nutrients found in animal foods. If people got that message, it would make a big difference in their health and in our public health status.”

For more perspective, here’s an excerpt taken directly from the book:

“Focusing on the muscle meats appears to be a relatively recent phenomenon. In every history on the subject, the evidence suggests that early human populations preferred the fat and viscera (also called offal or organ meat) of the animal over its muscle meat. The Inuit were careful to save fatty meat and organs for human consumption while giving leaner meat to the dogs. In this way, humans ate as other large, meat-eating mammals do. Lions and tigers, for example, first ravage the blood, hearts, kidneys, livers and brains of the animals they kill, often leaving the muscle meat for vultures. These viscera tend to be much higher in fat, especially saturated fat (half of the fat in a deer kidney is saturated, for instance.) Preferentially eating the fattest part of the animal and selecting animals at the fattest point in their life cycle appear to have been consistent hunting patterns among humans throughout history…”