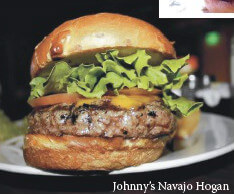 “People are really enjoying the beef,” says Cici Owens, the restaurant manager. “Our hamburger customers noticed the difference right off the bat.”

Here’s a fun dose of food trivia: May is considered national burger month. But this year’s celebration of the classic All American sandwich comes on the heels of a spring media frenzy over cheap ammonia-treated pulverized meat slurry — commonly referred to as “pink slime” although its technical name is lean finely textured beef — believed to be used in up to 70 percent of commodity ground beef. A push is on to have the ingredient labeled on grocery store packaging. Schools have also been given the choice to opt out when purchasing their hamburger through the federal school lunch program.

Of course, Callicrate ground beef is 100 percent free of the frozen ammoniated product, which is extracted from the last bit of the trimmed carcass using a high-heat industrial process.

Cici Owens says the public uproar over the process got insiders in the food business talking. “People just don’t know what they are eating these days,” she says.

When the story broke, she was glad she could guarantee her customers wholesome locally-ground beef in their blue-cheese bacon burgers and on their hamburger pizzas. “We are very happy with Callicrate Beef,” she says.

Likewise, Liz Purcell, who co-owns Hanson’s Grill & Tavern in Denver’s Washington Park neighborhood with her sister Cat Cameron, isn’t willing to feed her customers anything she wouldn’t eat herself. When they bought the neighborhood grill, that meant carefully researching potential beef suppliers before settling on Ranch Foods Direct. They first connected with the company through the Ranch Foods Direct outlet at the Denver Urban Homesteading year-round farmers market on Santa Fe.

“It’s been fantastic,” says Liz, who has worked in the restaurant business for two decades. “And it’s personal. I don’t want to eat something I know has not been cared for well. And why would I serve something like that to somebody else? This restaurant is an extension of my home.”

The duo isn’t swayed by fads or the vagaries of the Denver food scene, Liz adds, opting instead for classic American comfort foods that never go out of style. They use Callicrate ground beef in their meatloaf and meatballs in addition to offering a variety of burgers.

But while trends come and go, the beef between the buns is something the two take very seriously. “There are ranchers in our family. That’s why we made the decision we did about which beef to buy in the first place,” she says.