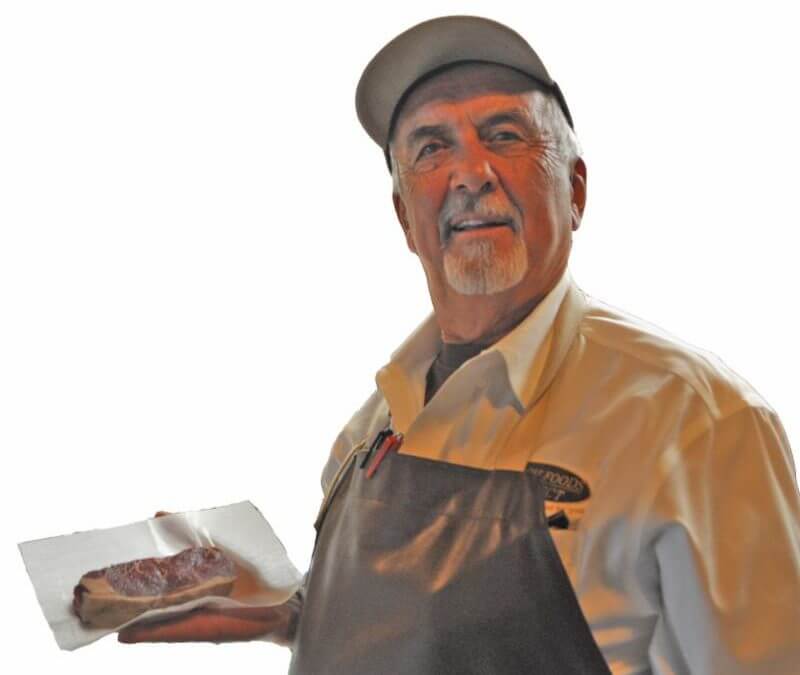 Lucky customers had the chance to meet John Nicocia last month while he filled in for Roger at the retail meat counter. They also had a chance to taste his influence in the hearty Italian-style meatballs prepared to his specifications by Chef Aaron. “If I see a darker steak in the meat case, I take it home,” he explains. “That’s the best meat you can buy. It’s been aging for awhile and that makes it very tender.”

John Nicocia’s decades of experience and his fascinating background have made him a real asset at Ranch Foods Direct, where he has been part of the meat-cutting team for the past two years ago. Here’s more on John.

ON WORKING FOR RANCH FOODS DIRECT: “This is the best beef I’ve ever worked with. And I’m working with some very, very good people. Luis (who runs the meat-cutting department) is such an awesome person. He’s just one of the boys. He’s not my boss, he’s my co-worker.”

ON HIS BACKGROUND: “I’m from Sicily. When I first came to this country, I was 16 years old. My first job was at a poultry plant killing chickens for 50 cents an hour. That was good money back then! I did that for two years. At 18, I went to work for a company that made chainsaws, running their shipping department. In 1960, when I was 28, I went to work as a meat-cutter and eventually managed a meat shop in Beverly Hills. I enjoy meat cutting. It’s just in my blood. My wife, Cheryl, is Polish. I met her in California when I was in my early twenties. Actually her father was Swedish and her mother was Polish. She makes a lot of Polish dishes she learned from her mom, also German rouladen, and things like that. We moved here to Colorado Springs to be closer to our daughter.”

ON WHAT HE GREW UP EATING: “Lots of spaghetti and meatballs; we would make them with ground beef, breadcrumbs, eggs, parsley, garlic, Parmesan or Romano cheese, all of it mixed together with a little bit of wine. You could also put pork or veal in it. I like a combination of ground beef with Italian sausage to give it more flavor. Also lots of fresh fish and pasta everyday. And couscous, since Morocco is so close to Italy. We would make our own from scratch with semolina and water. One popular dish was to steam fish and put it over the couscous with a fish broth to give it flavor, and add some fresh vegetables like mushrooms, cauliflower or asparagus.

As far as desserts go, cannoli was number one. The cannoli is made with fresh ricotta filling, with just a little bit of sugar and cinnamon. You can also add chocolate chips or fruit. But the ricotta there is altogether different than the American version. In Sicily, everything’s made fresh, and there are never any leftovers. I still go back to visit once a year or so.”

FAVORITE RFD ITEMS: “A good steak or roast. I also like the chicken breasts or thighs marinaded overnight in a good Italian dressing made with olive oil.”