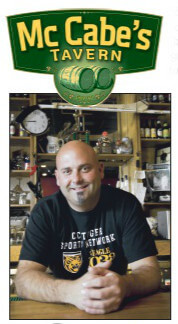 Growing up in New York, Greg Howard was surrounded by Irish food and culture and dreamed of someday opening a neighborhood pub true to the spirit of the places he knew. “The tradition of Irish pubs is that they got their name from being a ‘public house.’ It was where farmers and ranchers who lived in the sparsely populated neighborhoods came together with their families,” Greg explains.

After cooking professionally for 20 years — everything from Mexican to fondue — Greg brought a taste of that tradition to Colorado Springs six years ago when he opened McCabe’s Tavern in what had been the old Wayfarer downtown. Named in honor of his maternal grandmother, McCabe’s is now consistently voted as the community’s favorite Irish pub, offering live music about twice a month, a wide variety of beers on tap and — just as importantly to its owners — good home-cooked food made with many locally sourced ingredients.

“We have a bar, but we also have a full dining room,” says Greg’s wife Ari, who does the books and runs the front of the house. “Families bring their kids in during the day for lunch.”

March is a big month at McCabe’s, which celebrates its anniversary on March 10 with a Customer Appreciation Party. New menu items will be available for sampling throughout the afternoon and a live band will play that night. And on St. Patrick’s Day, March 17, the restaurant plans to serve thousands of classic Irish entrees, the same dishes it offers 363 days a year (it closes on Thanksgiving and Christmas only) but with a little extra Irish cheer (and green beer.) Known locally as the place to go for authentic Irish favorites, the corned beef is tender enough to serve in traditional chunks rather than thinly sliced, and the house-cooked Reuben sandwich features chopped meat mixed together with sauerkraut for moist flavor.

Cabbage, along with lamb and potatoes, were affordable ingredients that Irish peasants transformed into hearty comfort foods like shepherd’s pie and lamb stew, Greg explains.

McCabe’s buys all of its lamb, steaks and burgers from Ranch Foods Direct. “It costs more, but it’s local and it’s a better product, so it’s worth it,” Ari says. For the new anniversary menu, Greg is introducing a couple of new burgers: a Philly steak burger and a “breakfast burger” with bacon, egg and cheese. He plans to start featuring a different steak special every night.

As a partner in Ranch Foods Direct’s “Pay Forward” card program, McCabe’s rewards cardholders with a free dish of dessert heaven: bread pudding in a butter and whiskey reduction sauce. “The bread pudding is amazing. I’d eat it for breakfast, lunch and dinner, if I could,” Ari raves.