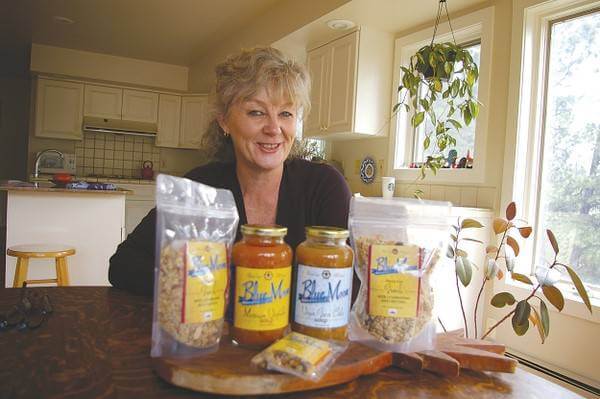 Many Ranch Foods Direct customers will be gratified to see all the early season produce arriving from Milberger Farms of Pueblo. Kelly Strong (shown above) sees the benefit of buying local, too, and she helps extend the season for local growers by incorporating what they produce into her popular small-batch soups and basil-parsley-walnut pesto.

Her business, Blue Moon Goodness, actually began when she decided to try selling her family’s special granola, made with local honey. “It’s based on my mother’s recipe,” she says. “I was making it at home, and people who had it at my house started bartering stuff for it. I traded it out for yoga and with the guy who plows my drive. He said he would rather have the granola than money… We always had really good food growing up. My mother cooked at lot, and she still does.”

Kelly’s gluten free granolas, frozen pestos and jarred soups are all available at Ranch Foods Direct, which it turns out, was one of her first wholesale customers a year ago and helped to solidify the quick success of her business. Following is more about Kelly’s background, food philosophies and products.

ON HER SOUPS: “We do a Moroccan vegetable and a vegan green chile. We also plan to introduce a tomato fennel in the next few months. We started out making our soups to sell by the quart and the gallon to restaurants, then we realized we could hot-pack them and make them shelf stable.

The Moroccan soup came about because I lived in Morocco as a young woman and I learned to cook with a Moroccan family. When I came to Colorado, I was struck by the chile peppers, which appealed to me so much because they almost seem to have the same spice as Moroccan food has. I love everything about the chiles from Pueblo, and they fit with the way I cook, which is to roast together lots of different vegetables. My Moroccan soup is spicy but in a subtle, aromatic way. I can’t tell you how many times I’ve had kids taste it and say they really like it. It’s also a really healthy soup. It contains lentils, which are such an under-rated food. They have natural protein and fiber and they grow easily in a lot of places, which means they aren’t expensive. Lentils could save the world, I think.”

ON USING LOCAL SEASONAL PRODUCE: “When I was in Morocco, I lived in small town in the biggest farming region in Morocco where they are really proud of their food. When you are in a farming community, you appreciate what’s in season. You didn’t eat artichokes all year round, you only had them in the spring, when they were in season. You were very aware of what was available fresh. We’ve lost a little bit of that here in America…

Local farmers need a way for their products to live on after the season, and I feel so happy that I get to use local products and support the local economy. When I ship my soup around the country with Colorado Proud stickers on it, it makes me feel like an ambassador, in a way. People don’t know about the great chiles we have here, but I make it very clear that these particular chiles are something you can’t get anywhere else. The Colorado Department of Agriculture has been very supportive and I feel like Colorado is ahead of other states in this whole ‘know your farmer’ thing. I appreciate the relationship we have here between the farmers and the food producers.

ON BEING GLUTEN FREE: I have a daughter who lives in New York City, who has a lot of health problems, and gluten is a trigger. We also have several celiacs in our family. And there’s so much attention on that topic right now. But to tell you the truth, the things that I would put into a soup that would be glutenous would likely not be very natural anyway, they would probably be highly processed, so it’s not even something I really think about. A lot of things that go into canned soups aren’t necessary; they are more just for the sake of making it cosmetically appealing. That’s what I love about your store and what’s going on there, and the new food movement in general. I go to the farmers market in Woodland Park, and I like having that connection to farmers and to my food. It’s not very hard to figure out why people have so many health problems today. Back in our parents’ day, they just made real food. I really subscribe to what (author) Michael Pollan says about food: Eat real food, mostly vegetables. And if your grandmother wouldn’t recognize it, you probably shouldn’t eat it. It’s not such a hard thing to do.

ON HOW SHE CHOSE HER COMPANY’S NAME: It has to do with honey and with bees. I was always fascinated by bees, so I decided to put up a beehive in my yard in Woodland Park, back when my daughter was little. Sophia, my daughter, who is 22 now, she’s a nature girl, very empathetic and calm. She helped her father hive those bees during a blue moon (which refers to the second full moon in the same month, something that happens once a year at most.) So when I needed to get agricultural zoning for the bees, which were making the honey I was using for my granola, the zoning commission asked for the name of my business and I had to think of a name fast. That’s what came to me.

ON WHY SHE’S HERE AND WHERE SHE’S FROM: I live in a great spot. It’s so beautiful. I’ve lived up here in Woodland Park for 26 years now. When I first came to Colorado, I was only planning to stay for one year. I came out here for the tech business, but I just fell in love with these mountains, I really did. My family on the East Coast still asks me when I’m coming home. But I am home.

I grew up in Philadelphia, which is a real food town. I would go to the Italian market with my mother; that’s the open air market on Ninth Street. Back when I was growing up you could still watch them run the animals right into the butcher shop. So when I’m at the Ranch Foods Direct store and see the meat hanging in the cooler, I feel like I’m home. When I moved to Morocco, I took up hunting, and I love having that connection to my food. I’m not one of those girlie girls; it was important to me to learn how to do that.

When I first got to Morocco, though, I had no idea what I was doing. I got a chicken so my daughter could have really fresh eggs. So I’m waiting and waiting and I’ll never forget what happened next. I finally gave up and had my daughter take it into town to be killed by the butcher. She brought it back home, and so I’m cleaning it, and there they were. The eggs! I had run out of patience. My neighbors thought it was so funny. They sent their little boy over with an egg that was still warm from their chicken.

“Our slogan is ‘just add meat'” she says. Here’s some of her suggestions for turning soup into a heftier meal:

For the Moroccan vegetable, “get a little piece of lamb, cook it in chunks and add it to the soup along with a squeeze of fresh lemon,” she says. “Then serve fresh dates on the side. To have a little plate of dates is a very traditional way to serve it.”

“You can also poach an egg in it and have it for breakfast. Just bring the soup to a boil, crack an egg into it, and wait until the white is done to your liking. That’s a really popular way to cook in Morocco. You can do that with our vegan green chile soup as well.

“For the green chile, I recommend adding your favorite cheese and melting that into it, or fortify it with some leftover meat, maybe shredded roast chicken. People also put this soup over rice or over fried potatoes.

Colorado grows a lot of potatoes and they are so easy to prepare: just coat them with olive oil, season with salt and pepper and stick them in a hot oven for ten to fifteen minutes.”